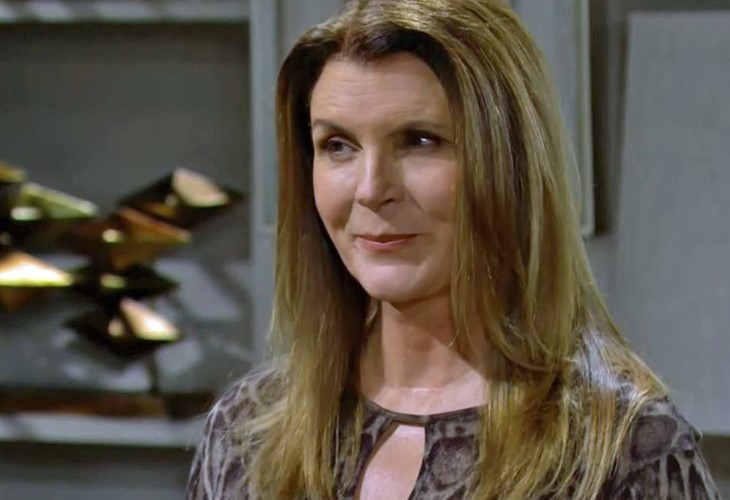 The Bold and the Beautiful spoilers reveal that Sheila Carter (Kimberlin Brown) gets help from Taylor Hayes (Krista Allen). After Sheila’s Christmas miracle, she will express her gratitude to Taylor. Ridge Forrester’s (Thorsten Kaye) love life could be directly impacted by that gratitude, especially after an explosive interaction with Brooke Logan Forrester (Katherine Kelly Lang).

B&B spoilers reveal that Sheila wants nothing more than to build a bond with John “Finn” Finnegan (Tanner Novlan) and Hayes Forrester Finnegan. When Sheila learns that Taylor is back in town, she won’t be happy. However, Sheila comes up with a new plan and takes matters into her own hands. After speaking with Taylor, Sheila gets a Christmas miracle.

Taylor will convince Steffy Forrester Finnegan (Jacqueline MacInnes Wood) to invite Sheila to spend Christmas with the family. Steffy is shocked at first, but Taylor ends up convincing her. Taylor probably assures Steffy that she would never do anything to endanger her or the children. Plus, Steffy and Finn will both be there the entire time, so Sheila won’t be able to get away with anything. Steffy most likely isn’t thrilled with this idea, but ends up taking her mother’s advice and extends the invitation to Sheila.

During the week of December 20, Sheila will tell Taylor how thankful she is for her help. Sheila is pretty intense, so she goes after her enemies with everything she’s got. On the flip side, Sheila will also help her allies the best she can – especially if it will benefit her in the long run – and we might see that happen with Taylor.

The Bold and the Beautiful spoilers for the week of December 27 reveal that Sheila will have a brutal interaction with Brooke. Right now, Brooke is trying to save her marriage. However, Ridge won’t compromise when it comes to Deacon Sharpe (Sean Kanan) and Hope Logan Spencer (Annika Noelle). After Brooke threatens Sheila, the villain could use Ridge and Deacon’s tension to get revenge and help her new ally at the same time.

Taylor and Sheila will never be friends due to their history, but it sounds like they do become allies. So, when Brooke threatens to undo all the progress Sheila’s made with Taylor’s help, she will take drastic action. One way Sheila can do that is by making sure Brooke loses Ridge and ends up with Taylor. However, when her manipulations are discovered, could it destroy her newfound family bond?

The Duggars Spoilers: What’s Next for Anna Duggar?