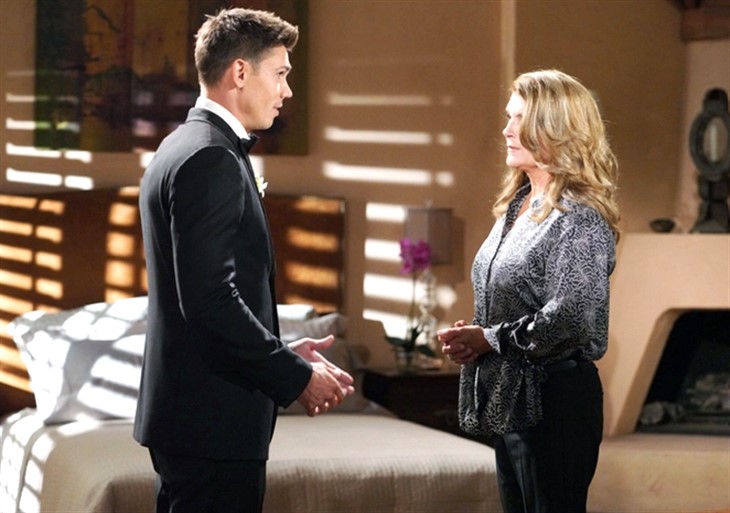 The Bold and the Beautiful (B&B) spoilers reveal that in Los Angeles Steffy Forrester (Jacqueline MacInnes Wood) tells John “Finn” Finnegan (Tanner Novlan) to leave her home. The actor explains that Finn got sucked into Sheila Carter’s (Kimberlin Brown) vortex. While separated, Finn gets even closer to his mother. Steffy panics and makes an agonizing plea for her husband to see it’s just a con.

The Bold And The Beautiful Spoilers – John Finnegan Moves Out

B&B spoilers reveal that Steffy loves Finn, but her first priority has to be her children. Steffy decides that Finn needs to move out. Staying in the guest house while his marriage is in limbo, Finn regrets betraying Steffy. He hopes that his marriage will overcome this obstacle, but everything is uncertain right now.

While Steffy and the Forresters are focused on taking action against Sheila, Finn is vulnerable and alone. Finn will lean on Paris Buckingham (Diamond White), who vows to stand by his side. Meanwhile, Zende Forrester (Delon de Metz) is at odds with Paris over the Sheila situation. However, there is a worse threat than Paris getting too close to the distraught doctor.

B&B spoilers reveal that Novlan told Soap Opera Digest that Finn just got “sucked into this vortex.” With Finn even more vulnerable apart from Steffy, he’s not going to be on guard. It will also be easier for him to believe Sheila as he desperately needs someone to lean on. Sheila is going to take full advantage of this by putting all kinds of lies in Finn’s head. She might even tell Finn that if Steffy really loved him, he wouldn’t be forced to choose.

Sheila will probably give Finn a long story about everything she’s done to change for the better and just needs a chance. Due to Finn’s longing for a genetic connection, he might decide to give Sheila a chance. He wants both worlds even though that’s impossible. Eventually, Finn will have to choose either Sheila or Steffy.

The Bold and the Beautiful spoilers reveal that Finn got sucked in Sheila’s vortex. The actor told Soap Opera Digest,

“Finn really loves this girl. But he found himself just sucked into this vortex. Finn is really hoping that he and Steffy can find a way to navigate their way through all of this. But let’s face it, we knew they couldn’t be happy for too long, right?”

The Bold And The Beautiful Spoilers  -Agonizing Plea

It is teased that while separated from Steffy, Finn will actually gravitate even closer to Sheila. When Steffy finds out that Sheila has her hooks in Finn, she takes action. Steffy can’t force Finn to make the right decision. However, she does make an emotional and agonizing plea for Finn to see Sheila as she is, not as the loving mother he wants her to be. Will Steffy be able to get through to Finn or has Sheila already destroyed “SINN?”