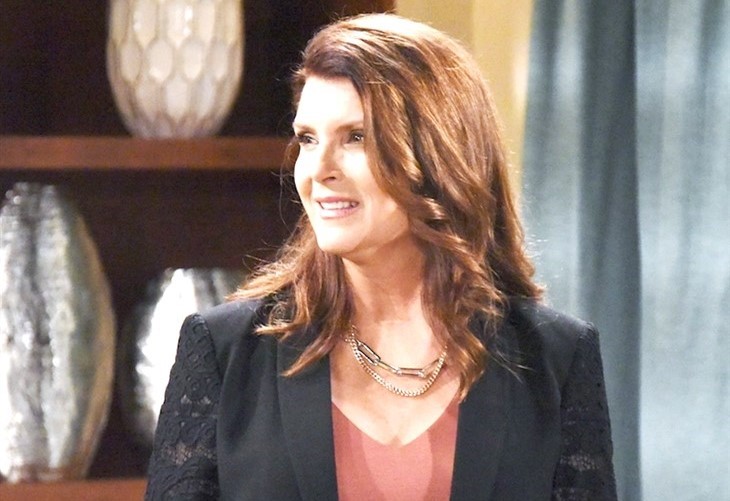 The Bold and the Beautiful spoilers reveal that Sheila Carter (Kimberlin Brown) and Steffy Forrester’s (Jacqueline MacInnes Wood) war is just beginning. Despite nearly everyone being against Sheila having contact with John “Finn” Finnegan (Tanner Novlan) and the baby, Brown insists that the villain’s actions are out of love.

The Bold And The Beautiful Spoilers – Sheila Carter’s Reappearance

B&B spoilers reveal that the last person Finn was expecting to see on his wedding day was his birth mother. Likewise, Steffy also never expected Sheila to create so much drama with her new family. Even though Finn finally told his mother goodbye when the medical tests showed nothing was wrong with her, Sheila isn’t staying away.

In the beginning, Finn was in conflict regarding his biological mother. The doctor had always wanted to know his mother, what she was like, why he was given up for adoption and if she ever thought about him. So, his dream quickly turned into a nightmare. It is only recently that Finn finally realizes that his mother isn’t so innocent. Besides, Finn knows that if he doesn’t take a stand against Sheila, then he could lose both Steffy and Hayes Forrester Finnegan.

The Bold And The Beautiful Spoilers – Just Wants Love And Happiness

The Bold and the Beautiful spoilers reveal that Brown spoke to Soaps.com about Sheila. While many fans still view Sheila as a villain and a threat to “SINN,’ the actress disagrees. Brown said that Sheila has always just wanted love and at every turn, someone rich and powerful is always trying to take it away from her.

“It’s always been about a powerful family or a powerful woman denying Sheila her happiness. And I guess there came a point in her life where she wasn’t going to take it anymore! But she simply wanted to be loved…”

Brown also explained past storylines and gave Sheila’s view on the issues,

“[Eric Forrester, John McCook] was an opportunity for a new start… this incredibly powerful man fell in love with her for who she was. Stephanie [Forrester, Susan Flannery] had no interest in him until Sheila was interested in him! Along those same lines, [The Young and the Restless’] Lauren Fenmore Baldwin [Tracey E. Bregman] had no interest in [her husband] Scott [Grainger, Peter Barton] until Sheila wanted him.”

The Bold And The Beautiful Spoilers – What About ‘SINN’

When it comes to Finn, Sheila views Steffy just like Stephanie and Lauren. The villain feels that Steffy is blocking her from having her son’s love and being able to be happy.

“She’s never been given that love or even the chance, because whenever she’s gotten close, someone has gotten in the way, and that’s when she does the things that she does… [Steffy] is a big roadblock.”