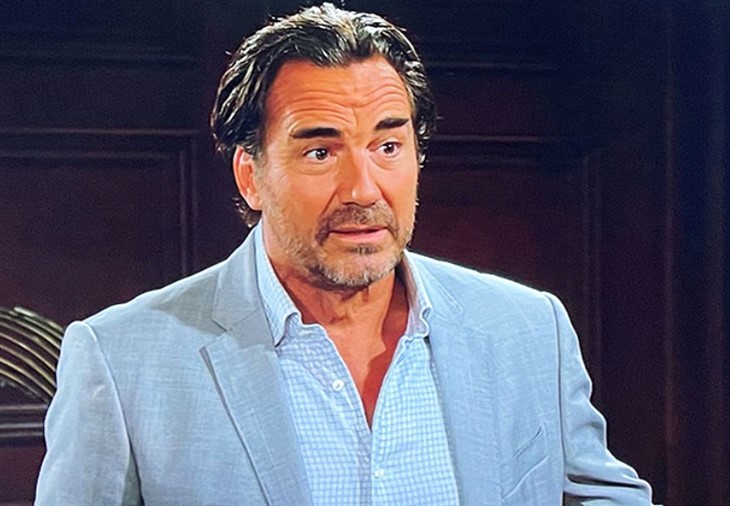 The Bold and the Beautiful spoilers for Thursday, October 14, 2021, reveal Ridge Forrester once again putting his nose where it doesn’t belong. Will someone ever put him in his place?

Now that Ridge (Thorsten Kaye) is over the shock of Deacon Sharpe (Sean Kanan) being back in town, Ridge can turn his attention back to his father’s life because he apparently doesn’t have one of his own. Ridge remembers how angry he is with Quinn Fuller (Rena Sofer) and Carter Walton (Lawrence Saint-Victor), so he has to let them know it and once again tells them they have no right to do what they are doing to Eric Forrester (John McCook).

Carter and Quinn have to once again remind Ridge that it was Eric’s idea for them to have a sexual relationship since he can’t have one with Quinn due to erectile dysfunction. Realizing that he isn’t getting anywhere with Carter and Quinn, Ridge moves on to Eric. He chews out his father for making such foolish decisions with Quinn. Will Eric tell him to focus on his own life and just leave him alone? Eric’s decision might be a bit odd and off, but it’s his decision to make.

For some reason, Paris Buckingham (Diamond White) has been having a very hard time finding an apartment or for herself. Considering she has a great-paying job, this shouldn’t be so difficult, but apparently, it is. First, she had to live with newlyweds Steffy (Jacqueline MacInnes Wood) and Finn (Tanner Novlan), and then she thought she hit paydirt when she was going to sublet Thomas’s (Matthew Atkinson) apartment, except his house deal fell through.

Thomas can’t let the woman practically live out of her car anymore, so he figures they will just have to be platonic roommates and Paris is all for it. To that end, the new roomies celebrate their new living arrangements on Thursday. How will Zende Forrester (Delon De Metz) feel about all this now that he and Paris are finally back on track? Are we about to see a real triangle? Stay tuned to The Bold and the Beautiful weekdays to see how these stories play out.