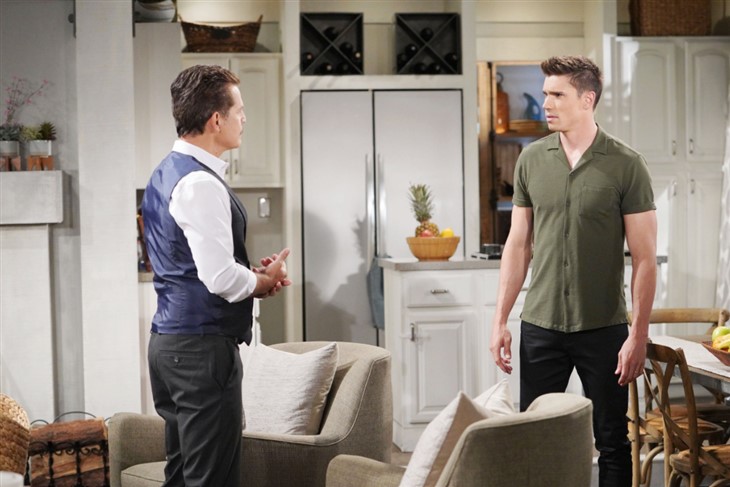 The Bold and the Beautiful spoilers reveal that Jack Finnegan (Ted King) and Sheila Carter (Kimberlin Brown) have an odd relationship. King explained that Jack’s feelings for Sheila are complicated and he feels both sympathy and repulsion. The actor explained why this situation is so difficult for Jack to navigate, as well as his “huge burden.”

The Bold And The Beautiful Spoilers – Jack Finnegan’s Paternity Secret

B&B spoilers reveal that Sheila claims to be John “Finn” Finnegan’s (Tanner Novlan) birth mother. However, Finn never asked who his biological father was and it wasn’t information Sheila volunteered. When Jack and Sheila were alone, viewers’ fears were confirmed. The two had an affair and to this day, Li Finnegan (Naomi Matsuda) still has no idea that Jack is Finn’s biological father. This secret is what Sheila is using to blackmail Jack.

Before King made his debut as Jack Finnegan, the actor told Soap Opera Digest that the relationships involved were complicated. It was assumed he was talking about Finn and Li, but viewers now know it also includes Sheila. In a new interview with the magazine, King tried to explain why the relationship is so complicated without giving too much away.

The Bold And The Beautiful Spoilers – Feels Both Sympathy And Repulsion

The Bold and the Beautiful spoilers reveal that Jack feels both sympathy and repulsion for Sheila. These are two completely different feelings, so the actor did his best to explain. It seems that Jack doesn’t necessarily sympathize with Sheila, but with her suffering from mental illnesses. A part of him might also feel empathy for having to give up Finn, even though it was the right thing to do.

“There are times when Jack feels sympathy for her, and for lack of a better word, her mental illnesses. She clearly has some sociopathic tendencies, so I think Jack sees that and wants to feel sorry for her but then she’s trying to blackmail him and so his defenses go up… Jack has to walk that thin line between sympathy and repulsion.”

Jack has never told Li that he had an affair, which is how Finn came to be. It’s been over 30 years, which is a long time to keep a secret. So, why doesn’t Jack just tell Li the truth about being Finn’s real father? He might lose his marriage, but it would have spared Steffy Forrester (Jacqueline MacInnes Wood) a lot of pain. The actor explained,

“… he would love to be flippant about it and just say, ‘You know what? I’m just going to tell everybody.’ That actually does come up but then she [Sheila] realizes that’s probably a bluff… [the secret] is a huge burden for Jack to have carried all these years, and still carry.”