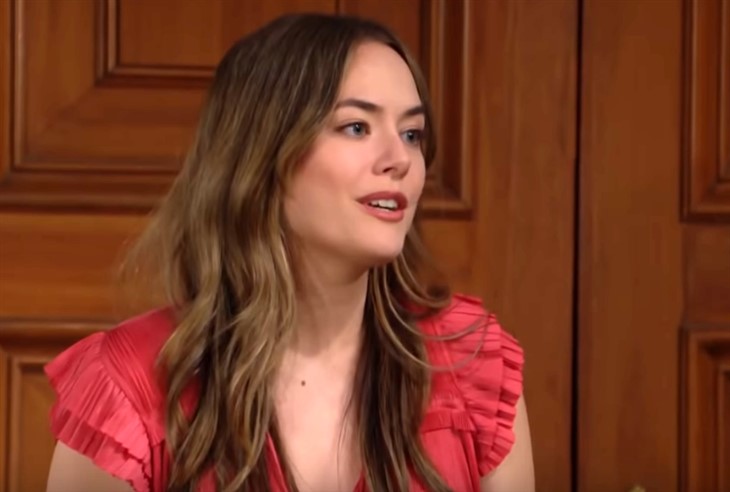 The Bold and the Beautiful (B&B) spoilers reveal that Hope Logan Spencer (Annika Noelle) intentionally puts herself in a dangerous situation. Her heroic act will end up saving Thomas Forrester’s (Matthew Atkinson) life. She chooses to take action instead of just calling the police. Could Hope be in denial about her real feelings for Thomas?

The Bold And The Beautiful Spoilers – Secretly Follows Justin Barber

B&B spoilers reveal that Hope has been worried about Thomas. He promised to be there for her and the kids. However, she hasn’t seen him since and can’t seem to get him by phone or text message either. She ends up confronting Justin Barber (Aaron D. Spears) about Thomas going missing. The attorney tells her that Thomas left town, which makes zero sense to Hope. If he were leaving L.A. Thomas wouldn’t be able to go without saying goodbye to Douglas Forrester (Henry Joseph Samiri). Plus, Hope calls his phone and it starts ringing in Justin’s office.

Hope suspects that Justin knows more about Thomas’ disappearance than he’s letting on. So, Hope carefully follows him, making sure to keep enough of a distance so he doesn’t realize it. He ends up unknowingly leading Hope right to Thomas, who is being kept prisoner in a cage.

“Hope is suspicious of Justin and feels like there is more to the story than he is telling her. So, she follows him down to the Spencer basement, where, lo and behold, she hears Thomas’ voice from the other side of the wall, and she is very stealthy about it. She hides away. The last thing she wants is to be found by Justin, so it’s a very high-risk situation.”

The Bold and the Beautiful spoilers reveal that following Justin and finding Thomas in a cage won’t be the only risky situations Hope faces. When Justin leaves, she rushes over to try and get the lock open. However, she is having a lot of problems with it. The lock simply will not cooperate. While she’s working on that, she is also keeping an eye on the time. She knows Justin is coming back. If she is there fiddling with the cage lock when Justin returns, then both Hope and Thomas could be hostages.

It is true that Justin isn’t a killer. However, desperate people do desperate things. Not only is Justin a desperate man right now, but he’s not mentally stable, so anything could happen.

Hope didn’t call the police and tell them what she suspected after talking to Justin. If she had, there is no guarantee detectives would even come out. She would need some kind of proof that Justin did something to Thomas. Plus, we don’t think he has even officially been reported missing yet.

What Hope should do is call the police. If she’s concerned about Justin hearing her, then she could have sent a text to Ridge Forrester (Thorsten Kaye), Deputy Chief Bradley Baker (Dan Martin) or even John “Finn” Finnegan (Tanner Novlan). Either the police need to play heroes or Hope needs some backup.

We know that Hope loves Liam Spencer (Scott Clifton). Is it true love, though, or is she just comfortable and familiar with Liam? We see signs that Hope might feel more than just friendship for Thomas. Liam gets transferred to a permanent prison, which means he gets sentenced. It will be a few weeks before he is cleared and released. Perhaps during that time, Hope will be honest with herself and think about her feelings for each man.