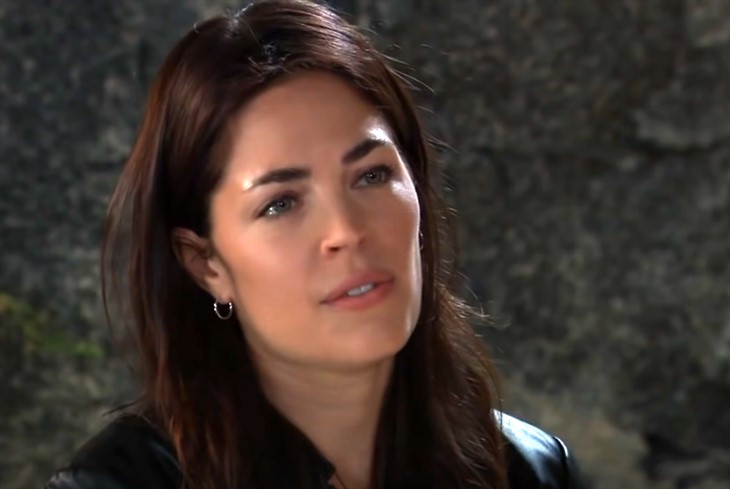 But Carly has found a way to end the budding romance, seemingly for good. Because of problems with the “business”, Jason and Carly have found a creative solution… they are getting married. Jason tried to let Britt down gently, but she rightfully threw him out. But there may be an unforeseen consequence to Britt and Jason’s brief romance on the run.

While Jason was on the run from the police on General Hospital, who had wrongly accused him of the murder of Franco Baldwin (Roger Howarth), he was forced to take Britt along for the ride. As he was escaping, Jason realized that Britt was in danger.

Cyrus Renault (Jeff Kober) had ordered her murdered and Jason got to her just in time on GH, but sadly was shot in the process. It’s a good thing that Britt had been there as she was able to patch the gunshot would up, with Carly literally opening a vein to provide the needed blood for a transfusion. But things didn’t end with Jason just being grateful. Britt had some things of her own to deal with.

General Hospital Spoilers – Dr. Britt Westbourne had been struggling with a medical issue.

According to General Hospital spoilers, Britt had been suffering from tremors in her hands. She was concerned that she had inherited Huntington’s Disease from her father, Cesar Faison (Anders Hove). She had put off getting tested because she was afraid of what the answer would be.

She confided in Jason, and although the tremors were unrelated, she did end up finding out that she will eventually get the same disease her father had. But Jason talked Britt through the pain of that discovery and the two finally made love. They had real feelings for each other, and likely would have continued their romance, until Carly and Jason realized they needed to get married for the sake of the Organization.

Britt is handling the revelation as best as she can. But she suddenly began to feel sick while visiting her best friend, Brad Cooper (Perry Shen) in prison. While she hasn’t had any kind of test just yet, it seems very possible that she might be carrying Jason’s baby. By chance, she ran into a similarly heartbroken Jasper “Jax” Jacks (Ingo Rademacher). The two will seem to hit it off, and they may find themselves becoming intimate as well. But what is Britt is already pregnant. Would she tell Jax that the baby is his, leaving Jason out of it altogether? Or would Jax step up and claim the child as his own, knowing all along the real father is Jason? Either way, if Britt is indeed with child, it seems that she will have no intention of letting Jason know.

Is Britt pregnant on General Hospital? Will Jax be told the child is his? Or will he go along with Britt’s plan to keep Jason in the dark? How will Jason react if he discovers the truth? And will Carly go crazy? Love can be a game of musical chairs in Port Charles, so stay tuned to General Hospital airing weekdays on ABC. And don’t forget to check back right here regularly for all your General Hospital news, information and spoilers!