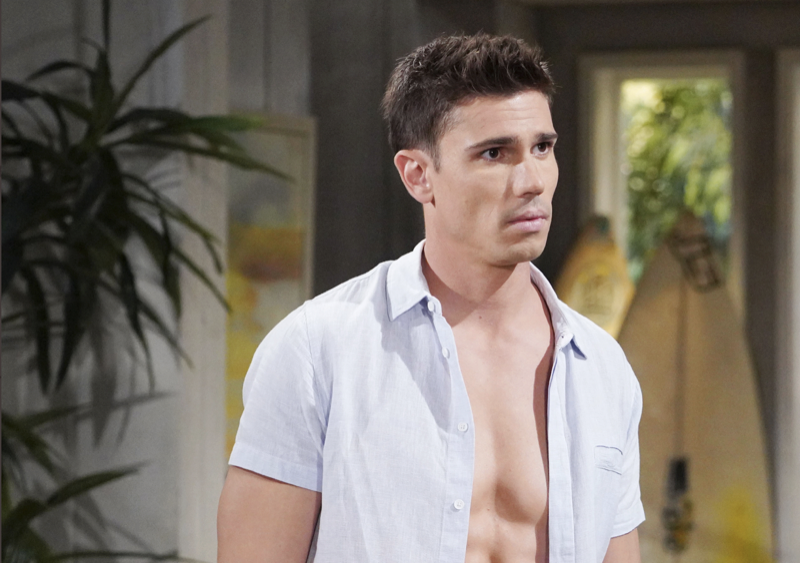 The Bold and the Beautiful (B&B) spoilers for Wednesday, August 25, 2021, reveal in Los Angeles Finn reeling at his father for suggesting he ever see Sheila Carter again.

The Bold and the Beautiful Spoilers: Will Finn Ruin His Marriage Already?

Finn (Tanner Novlan) seems to have gotten Sheila Carter (Kimberlin Brown) out of his system and is happily married to Steffy (Jacqueline MacInnes Wood) while never believing he’d betray her. He promised her he’d never have contact with Sheila again and he certainly would never let Sheila see Hayes. But then Jack Finnegan (Ted King) came around begging him to do just that. Finn insists he won’t do it and is furious his father would even ask that of him. This woman shot Taylor (Hunter Tylo) and deprived Steffy of having a mother around through much of her childhood. No, he will not see her.

But Jack begs and pleads and presents a case for Finn changing his mind. It’s just one time. Steffy is out of town anyway, so how can it hurt? Finn thinks about it and may end up making the biggest mistake of his life.

Quinn (Rena Sofer) and Eric Forrester (John McCook) are back together as man and wife, although not in the biblical sense since Eric seems to have a bit of a problem in that department. However, Carter (Lawrence Saint-Victor) is all alone and heartbroken and needs someone to talk to. He can’t confess all, but at least he can have some company around.

And Brooke (Katherine Kelly Lang) and Ridge (Thorsten Kaye) are good company we suppose. Carter tells them all about Eric asking for Quinn back and him delivering the portrait. It makes Carter sad not to have that portrait to stare at, but he can always conjure up images of his time with Quinn.

Will that time come again sooner rather than later since Quinn is a woman with needs that Eric can’t provide? Or will she just end up back with Carter because she fell in love with him and that spark isn’t there with Eric anymore, problems or not? Something tells us Quinn just won’t be able to stay away….Stay tuned to The Bold and the Beautiful weekdays to see how these stories play out.