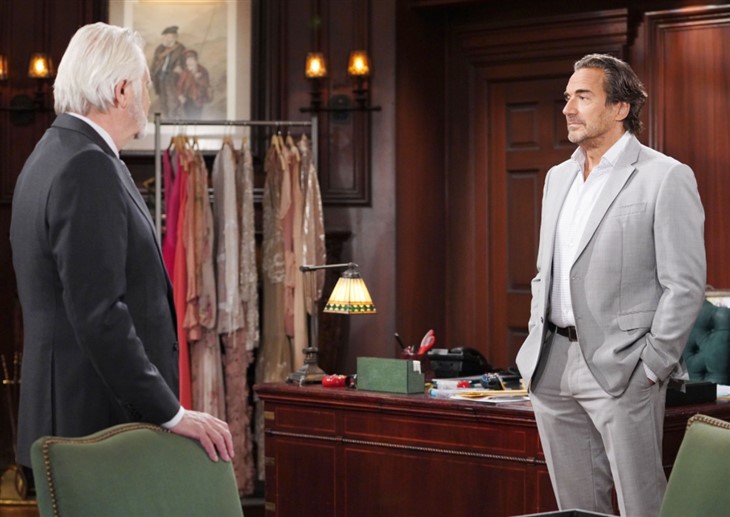 The Bold and the Beautiful (B&B) spoilers for Monday, October 4, 2021, reveal in Los Angeles Eric and Ridge Forrester having it out and Eric discovering something brand new.

After Justin (Aaron D. Spears) found Quinn Fuller (Rena Sofer) and Carter Walton (Lawrence Saint-Victor) and informed Ridge (Thorsten Kaye) and Brooke (Katherine Kelly Lang), they had to confront Quinn and Carter and Quinn blurted out that Eric (John McCook) is not only sanctioning their affair, but it was his idea. Brooke and Ridge refused to believe it, so when they then confronted Eric, he admitted it was true.

On Monday, he just tells the whole sordid story and ends up telling them he wants to be married to Quinn because he hates the idea of being in that big house all alone. Saying the words aloud and hearing them makes Eric realize the sad truth about his situation, but Brooke and Ridge still push and practically demand that he get rid of Quinn. Eric might know a new thing about himself but he also knows he is getting sick of these two people meddling.

Now that the Paris Is Obsessed With Finn story seems to have been dropped like a hot potato and Paris (Diamond White) has moved out of Steffy’s house, Finn (Tanner Novlan) needs a new friend to talk to about his dilemma with Sheila (Kimberlin Brown). He still wants to get to know this crazy woman and now Hope Logan Spencer (Annika Noelle) is the friend he turns to. Does Finn have any male friends?

Hope seems like an odd person to turn to, but so did Paris? Will she have any sound advice for her step-brother-in-law? And why is this friendship beginning? Is Steffy (Jacqueline MacInnes Wood) going to have to fight Hope for yet another man? Were years and years of fighting Hope for Liam (Scott Clifton) and then losing in the end not enough? Will Hope even be understanding about Sheila? After all, it’s no secret in LA how insane she is. (It’s no secret in Genoa City, as well.) Stay tuned to The Bold and the Beautiful weekdays to see how these stories play out.