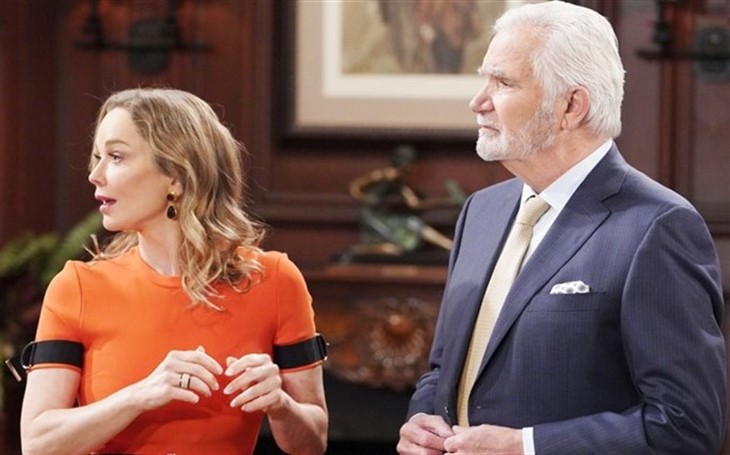 The Bold and the Beautiful (B&B) spoilers document that in Los Angeles Donna Logan (Jennifer Gareis) was shown lamenting the love she lost in the recent past. Purposeful scenes were written that teed up a Deric comeback, or so it seemed.

Queric was in danger because Quinn Fuller (Rena Sofer) strayed from Eric Forrester (John McCook), who later forgave her. Then, he did the improbable but not the impossible on B&B.

Eric’s allowance of Quarter did not last long. Quinn agreed to end her connection with Carter Walton (Lawrence Saint-Victor) so she could support her husband.

Eric’s physical issue and mental strife created a truly compassionate response. It was one Quinn’s detractors may not have been expecting.

The Bold And The Beautiful Spoilers – Quinn Fuller’s Position Shifts

Quinn fell in love with Carter. However, she did not seek to do that. Sofer’s character put herself in a position to exploit Carter’s vulnerability and satisfy her self-driven needs.

So, it seemed as though Queric will revert to life at the mansion. Time might pass and Eric could find that his ED problem can be resolved. Quinn thinks that is possible, which may be one of the reasons why she is returning to him.

TPTB have set Sofer’s character up nicely. She is currently scorned but can be turned into the aggrieved spouse. Those who despise Quinn almost certainly will not see it that way, assuming a projected Deric comeback happens.

Donna is a very sweet person. She is, in many ways, the anti-Quinn.

Any guy would be thrilled if Donna took an interest in him. Eric felt that way years ago and they married.

Eric loves Quinn. However, he will come to consider Donna’s place in his life.

There is no doubt that Eric and Donna still possess chemistry. But Eric needs to be on board now that Quinn has agreed to drop Carter and recommit herself to Queric.

If Donna follows through and makes a push for Eric, then the still-shaky Queric could fall. So instead of Quarter serving to end Queric it could be that a Deric reboot accomplishes the goal that all anti-Quinn viewers, Bridge, and others have wanted for years.