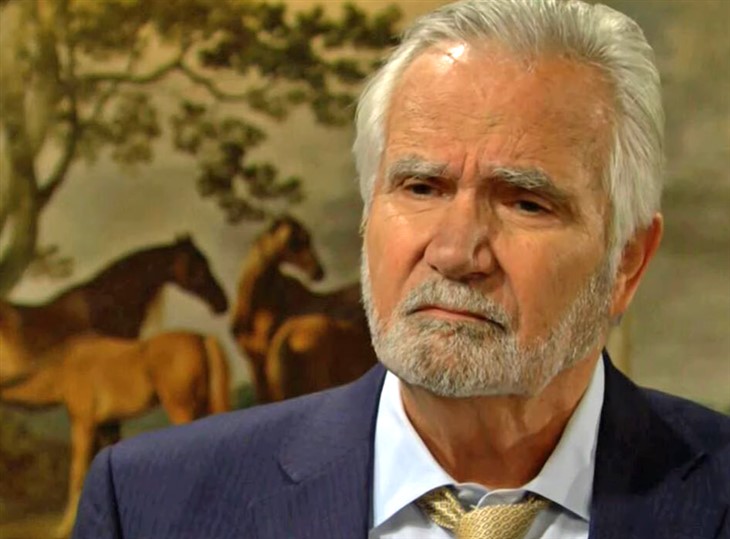 The Bold and the Beautiful (B&B) spoilers for Friday, October 15, 2021, reveal Eric Forrester coming to Quinn with some new news. Is he about to give his wife whiplash?

It was Eric’s (John McCook) idea that Quinn (Rena Sofer) still gets sexual satisfaction from Carter (Lawrence Saint-Victor) since he can’t give her any. He doesn’t realize erectile dysfunction doesn’t mean your intimate life is over, but that’s neither here nor there. Eric didn’t realize that Ridge Forrester (Thorsten Kaye) would have to know what was going on and ruin everything. He didn’t mind his business and then he hammered into Eric until Eric had to realize that maybe this was a mistake.

His talk with Katie (Heather Tom) made him also see this arrangement is a problem as he was able to see he didn’t want to let Quinn go because he didn’t want to live in his big house all alone. On Friday, he has some new demands of Quinn. Does he tell her she needs to stop sleeping with Carter or does she learn the divorce is back on? Will Quinn just accept whatever it is Eric has to say?

It’s been a while since we’ve seen Dollar Bill Spencer (Don Diamont) and it turns out not much has changed for him since summer. He is still determined to win Katie Logan back and still hasn’t managed to do so. This estrangement is becoming a long one and Bill is getting impatient. He’s been waiting for Katie to change her tune and take him back for ages and has even been staying away from other women, so what gives?

Is Katie ready to take Bill back yet or is she ready to just move on with her life without him? She was heartbroken when he went to jail earlier this year but is she ready to walk down the aisle and become his wife again? She’s been getting awfully close to Eric of late and that friendship might get in the way of her saying yes to Bill. Stay tuned to The Bold and the Beautiful weekdays to see how these stories play out.