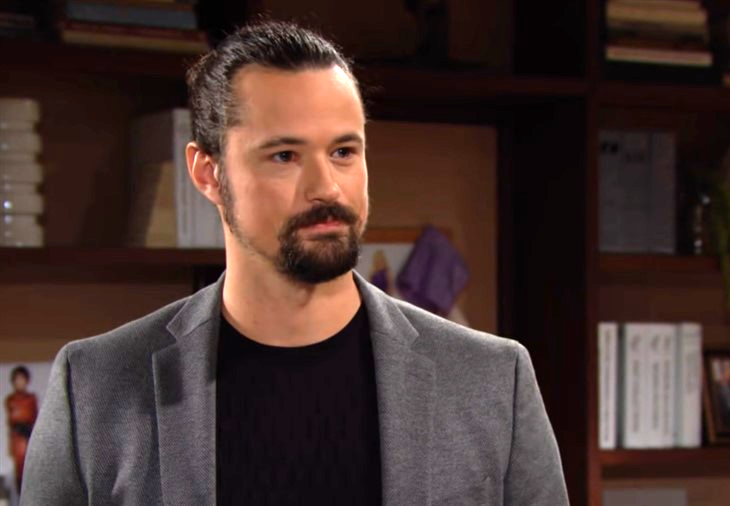 The Bold and the Beautiful (B&B) spoilers for Thursday, October 28, 2021, reveal Thomas Forrester keeping his eye on Paris Buckingham — despite the fact that she has a boyfriend.

The Bold And The Beautiful Spoilers – Will Thomas Lose His Mind Again?

We all know that Thomas (Matthew Atkinson) always wants a woman who belongs to someone else. He wanted Caroline (Linsey Godfrey) when she was married to his father, Ridge (Thorsten Kaye). He wanted Hope Logan (Annika Noelle) when she was clearly in love with Liam Spencer (Scott Clifton). And now his eyes are on his new roommate, Paris (Diamond White). And Paris is with Zende Forrester (Delon De Metz).

On Thursday, Zende and Paris take things to the next level in their relationship and make love — in Thomas’s apartment. As he watches their romance before the big moment, he is definitely jealous but will he keep himself contained or do something about it? Thomas had better watch his steps carefully.

The last time Thomas had a woman in his place, it was a fake woman he thought was real, so things can get dicey here. Or could this turn into a very different kind of story where Thomas tries to do the right thing and Paris falls for him?

Brooke Forrester (Katherine Kelly Lang) has been going all out trying to convince Eric Forrester (John McCook) and Donna (Jennifer Gareis) to throw Quinn Fuller (Rena Sofer) aside and reunite with one another. She has no problem with people cheating as long as she is for their romance. After all, who has cheated on more men than Brooke? It’s just what she does and she sees nothing wrong with it.

What Brooke does not expect is that Donna knows a secret she’s not quite sure she should tell. After a little prodding from Brooke and Katie (Heather Tom), it looks like the Logan sisters will know more about the state of Eric and Quinn’s marriage than they should. How will Brooke react to possibly learning that it’s Quinn who has been causing Eric’s little bedroom problem all along and Donna seems to have cure him? Stay tuned to The Bold and the Beautiful weekdays to see how these stories play out.