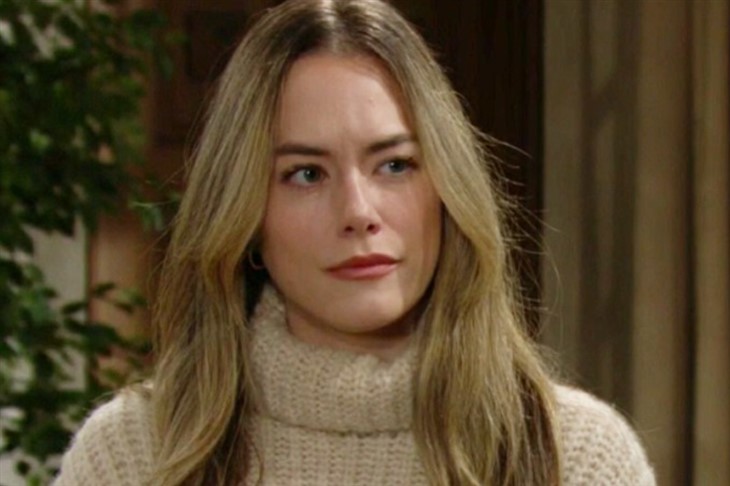 The Bold and the Beautiful (B&B) spoilers and updates tease that Hope Spencer (Annika Noelle) will play the hero. She will be shocked to learn that Justin Barber (Aaron Spears) has made Thomas Forrester (Matthew Atkinson) his prisoner.

In thinking about it, who else but Hope to save Thomas and Liam? She was at the center of those men’s rivalry in recent years, which included the incredible Hope mannequin storyline.

Generally, Ridge Forrester (Thorsten Kaye) would have his eyes on Thomas. But he’s been distracted by unfolding events involving his father and Quinn Fuller Forrester (Rena Sofer).

Steffy Forrester (Jacqueline MacInnes Wood) was having Hayes Finnegan (no actor’s name known for this newborn role) at the cliff house with her fiance, John Finnegan (Tanner Novlan). So, thankfully Hope is on the case.

B&B Updates And Spoilers – Rivals In Need Of Rescue

Liam’s situation was about to become more dire than he expected, as Deputy Chief Bradley Baker (Dan Martin) announces a transfer to a different prison. While fans are anticipating a backup copy of the video Justin erased to be found, it’s not known to exist yet. That means Hope’s coming tell to Martin’s character will purely be her claim.

Assuming Hope also informs the Deputy Chief about Thomas being held hostage (and why wouldn’t she?), then a swarm of the Spencer Publications’ basement is anticipated. Hopefully, B&B doesn’t stretch this plot by having Justin move Thomas to another location or otherwise go on the run with him.

With however long it takes, Liam stands to be freed as a result. He does deserve some punishment for not reporting the accident. But considering all circumstances, probation and community service would seem fair.

Bill wasn’t targeted by Vinny. He didn’t pass out after realizing Vinny was dead. And Diamont’s character only admitted what he’d done after Liam voluntarily went to the police and confessed his part in this mess.

Vinny’s frame, the evidence Thomas received via text of that crime, Justin’s actions, and Hope’s efforts don’t override the cover-up crimes Dollar Bill willfully committed. So, it remains to be seen what legal consequences he will face when all is revealed.

This site is a leading source for everything linked to The Bold and the Beautiful. Check back regularly for B&B spoilers, updates, and news!