Another 90 Day Fiancé Relationship May Be On The Rocks 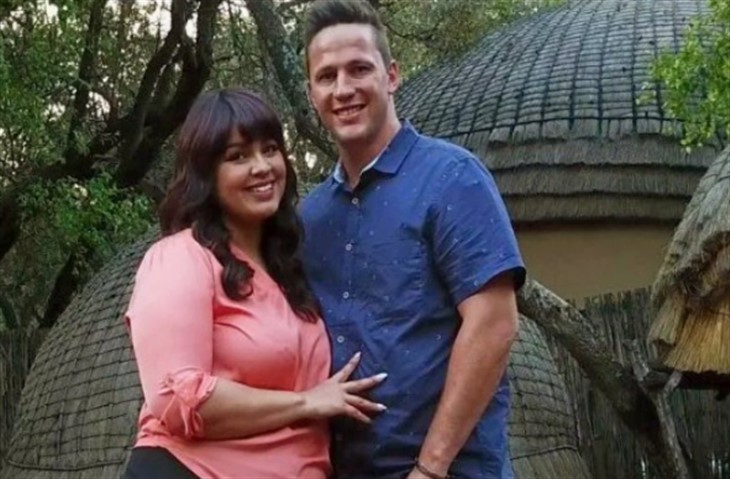 Right at the start of the current season of 90 Day Fiancé: Happily Ever After? it was clear that Natalie Mordovtseva and Mike Youngquist weren’t going to make it. However, it seems they aren’t the only TLC reality stars that could split before the season ends. Tiffany Franco and Ronald Smith have seemed to have a rocky relationship, while behind the scenes the couple has tried to prove their marriage is strong. Despite this, it looks like they are finally heading for a break-up.

During the series, Tiffany has regularly threatened Ronald, saying if he didn’t do his best to move to America, they would be over. However, Ronald has already told his children that if he is denied a visa, they would all return home to South Africa. So far, it is unclear whether Ronald has managed to get his spousal visa, or how the relationship is really doing. However, 90 Day Fiancé mega-fans have noticed that Ronald and Tiffany no longer follow each other on social media. This is never a good sign in the reality TV world.

Meanwhile, Tiffany may have explained the situation while responding to one of the comments on a social media post. The Instagram post, shared by @johnyates327tv, is included below. On the left, we see Tiffany’s original post, where she writes, “Feel like I can breathe again,” followed by “No more pretending.” 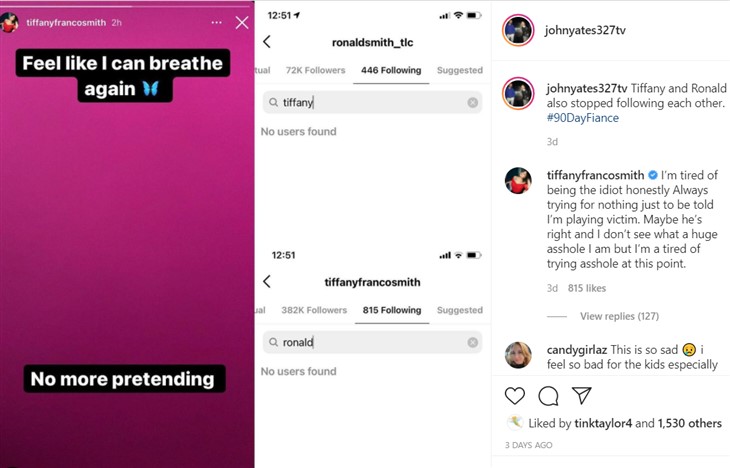 Under the comments section, Tiffany writes, “I’m tired of being the idiot honestly. Always trying for nothing just to be told I’m playing the victim. Maybe he’s right and I don’t see what a huge asshole I am but I’m tired of trying asshole at this point.”

Tiffany’s message does seem pretty clear that there is a major problem between the pair. While the news may not come as much of a surprise to fans, it is sad to see. One fan did comment, writing. “Just 3 days ago Ronald posted a very loving birthday post to Tiffany, and she Liked the post.. This just happened in the last 2 days? Hope they’re all OK.”

However, Ronald also reared his head in the comment thread with a statement of his own, which makes the situation pretty clear. He wrote at length, “You know what? At the end of the day, yes, she can take a breath because now she won’t be watching me anymore and I’m so so so tired of her playing the victim and always saying she’s the one getting hurt or I’m always doing fault or I’m doing this wrong or I don’t do this right. I’m not a father, I’m not a husband, I’m not worth [it], I’m not that. Tired, tired, tired of her pushing me down, No more and [sic] yummy.”

“Today you guys will soon see the real Tiffany very, very, soon because of this image everyone has of her. Nobody knows what I go through. Nobody knows what happens behind cameras. Nobody knows how she treats me. Nobody knows how she acts towards me. Nobody. So I’m gonna [sic] leave it there I will post stuff as time goes. I’m not gonna hate speech, anyone. Everyone has good in them, and everyone has faults. But if you can’t recognize your faults and start working on it, but just look at someone else’s fault and keep pointing it out to them. Keep throwing the past that then etc no doesn’t work like that. I’m sorry, it will never work like that by me not anymore. It is what it is.”

Tiffany and Ronald may have made efforts during the season to make it seem they were doing fine, but this is likely just for the cameras. Along the way, it has certainly been clear that things were not okay between them. What can we say? A TLC reality show wouldn’t be what it is without the added drama.

Fans can catch 90 Day Fiancé: Happily Ever After? on TLC Sundays at 8 pm ET.