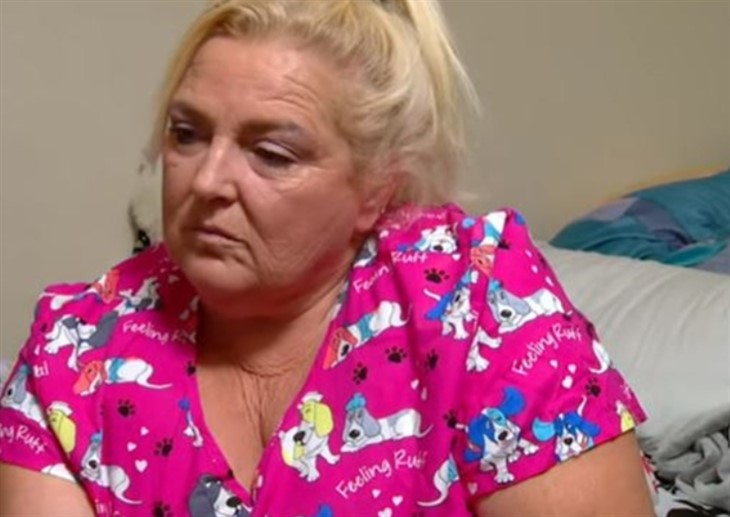 Angela Deem, 55, has a blowout fight with her husband, Michael, 33, and his aunt Lydia on part one of the 90 Day Fiancé: Happily Ever After?’s tell-all special.

In the shocking blow-up, Angela lost her temper and ended up flashing all of her fellow cast members as she stormed off the stage.

On Sunday’s episode of the tell-all series, Angela strutted out in a backless, red jumpsuit putting her 106 lb. slimmer body on display for fans and cast alike. 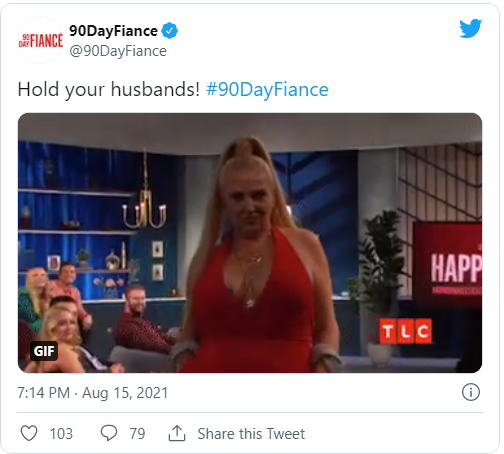 After undergoing breast reduction surgery along with her weight loss surgery, Angela reveals that, just last week, she had gotten breast implants.

When asked what prompted the implant surgery, Angela broke down in tears saying it was a lack of support from her husband following her weight loss surgery.

Angela continued opening up saying, “I really did think that you would take care of me emotionally because it’s an emotional roller coaster, and then he started complaining and making fun of me,” adding, “Like, my t_ts are too small, like, why are you laughing, Michael? ‘Your boobs are small.’ … That was very painful.”

“I really thought I was going to die. Like, really,” she said, referring to the reason for her weight loss surgery, “He doesn’t get it. Like, he’s 33, I’m 54. I possibly could not be alive when he gets here. All of this, we put up with. And he’s not going to make it because I’m not gonna make it.”

Trouble because with Angela on the show when it was brought up that Michael was upset that she had flirted heavily with her surgeon Dr. Obeng.

She shot back that he was a very, very caring man, adding that “You need to learn something from him.” Michael naturally clapped back that maybe she should marry her surgeon, instead. To this Angela’s response was to call him an, “_sshole”

Things didn’t really start getting heated until Michael’s aunt Lydia broke in virtually but before anything could be said, Angela said Lydia should mind her own business when it comes to her and Michael.

When Michael told Angela that she wasn’t even giving his aunt a chance to talk, Angela then turned on Michael.