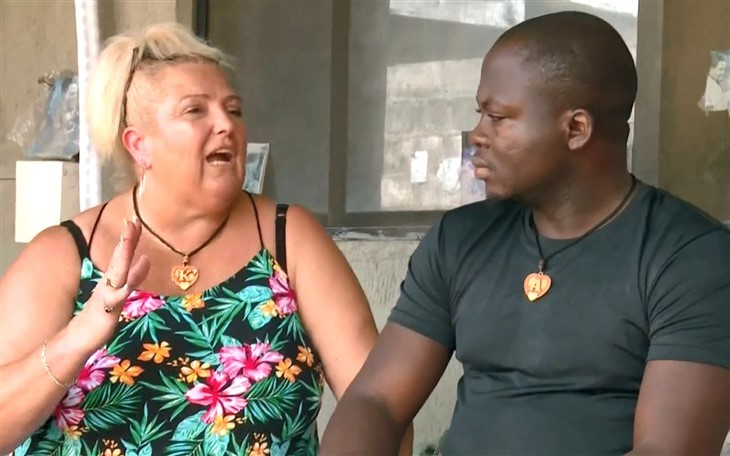 Angela Deem underwent weight-loss surgery last year and she seems very happy about it but she isn’t taking Michael Ilesanmi’s reaction to it well.

During Us Weekly’s sneak peek of the Sunday, August 15, 90 Day Fiancé: Happily Ever After? Tell All episode Angela, 55, broke down when attempting to tell Michael, 33, about her feelings on the matter.

She indicated that she had really believed he would take care of her emotionally but that he began making fun of her calling her “t_ts” small and laughing, saying, ““He would make fun and make fun. That was very painful,” as she broke down in tears.

She breaks down in front of her fellow 90 Day Fiancé: Happily Ever After? Tell All contestants baring her heart to them all.

Fans may remember that Angela got several surgeries, back in August of 2020, including liposuction, sleeve gastrectomy, and breast reduction. Since the gastrectomy, she has lost 90 pounds.

She told Us Weekly, in March, “I couldn’t even walk to the grocery store with the kids to get groceries,” saying she would be out of breath, and she knew it was not smoking that was causing it.

“I know smoking doesn’t help, but this was something [where] you just know it was weight.”

Earlier in the 90 Day Fiance season, she touched on the subject of Michael’s reaction to her surgery saying that he was not being the man she fell in love with.

She said that with all the surgeries, not having her partner there with her really hurt her, adding that with what he’s showing her by not being supportive – she never would have married him.

In the video, Michael gives emotionless responses to her tears saying, “It’s alright. I’m with you now. Don’t worry,” to which she claps back, “But you wasn’t [sic]!”

It is clear from the video that Angela is feeling very fragile due to the age difference between the two of them and that Michael is going to need to learn to be more nurturing or their relationship is likely to fall apart. Keep checking Soap Opera Spy for more 90 Day Fiance spoilers, news, and updates.

The Bold And The Beautiful Spoilers: Eric Wants Quinn Back

Y&R Spoilers: Will Mariah Give Birth Alone In Captivity?