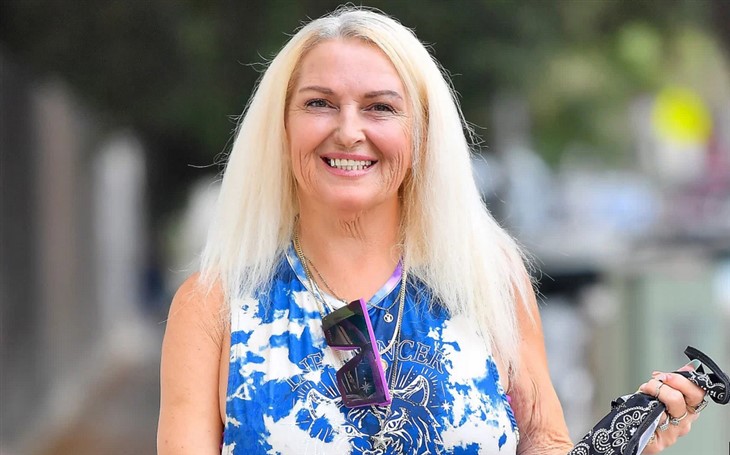 Former 90 Day Fiancé star Angela Deem is known for storming off the Happily Ever After? Tell-All set not once, but twice. However, she is also known for her incredible 90-pound weight loss and her slim and beautiful new look. Recently, it turns out Angela was spotted in Beverly Hills while visiting her chiropractor. A series of images were captured of her slim figure, clad in an athleisure outfit.

Most 90 Day Fiancé fans know that Angela, 55, had weight loss surgery in August last year. She also had a breast reduction and lift to tone up her body. While fans of the TLC reality show were quick to congratulate Angela on her new look, they also criticized the fact that she smoked both before and after the surgery.

Fans have also called out her abusive behavior towards her Nigerian husband, Michael and for openly flirting with her plastic surgeon, Dr. Michael Obeng. When questioned about her relationship with the plastic surgeon on the Tell-All, Angela did not respond well and ended up shockingly baring her new breasts for the cameras before storming off the set.

While many fans are disgusted with the former favorite meemaw for her behavior, they still continue to follow her life on social media. Since leaving the Tell-All set, Deem has been out and about at many major events in the US. However, her latest appearance was revealed by In Touch Weekly, who shared images of Angela in Beverly Hills on the way to her chiropractor.

The images reveal Angela’s slim figure, clad in an athleisure outfit with a tie-dye tank top and leggings. Her outfit truly reveals the results of her weight loss surgery to the full. While she normally wears her hair in a high ponytail, this time she lets it hang free. Angela clearly flaunts her confident smile as the cameras follow her through the streets of Beverly Hills.

Angela also picked up on an image shared by @90dayfianceupdate and shared it on her own Instagram page with the caption “Smiles.” 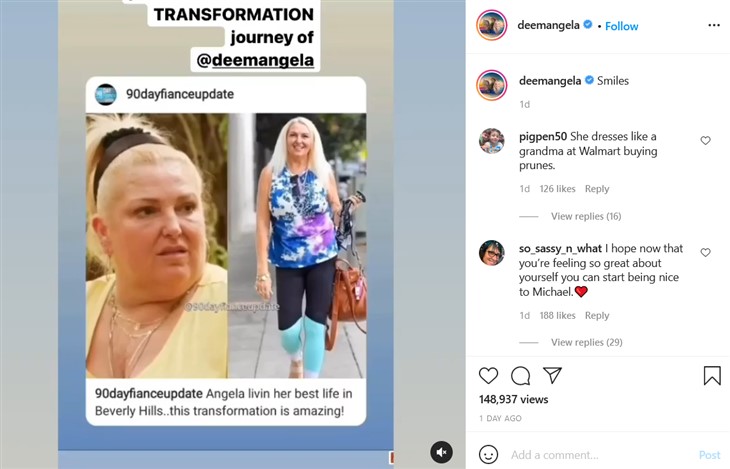 While she is looking good, it does look like Angela still needs to have surgery to rid herself of excess loose skin beneath her chin. However, even her haters must agree that she looks stunning and healthy in the images. Of course, her fans would love to see her back on 90 Day Fiancé, as long as she is prepared to treat her husband, Michael, well. After so much backlash from fellow cast members and fans, we will have to wait and see whether Angela will be back on the TLC network.