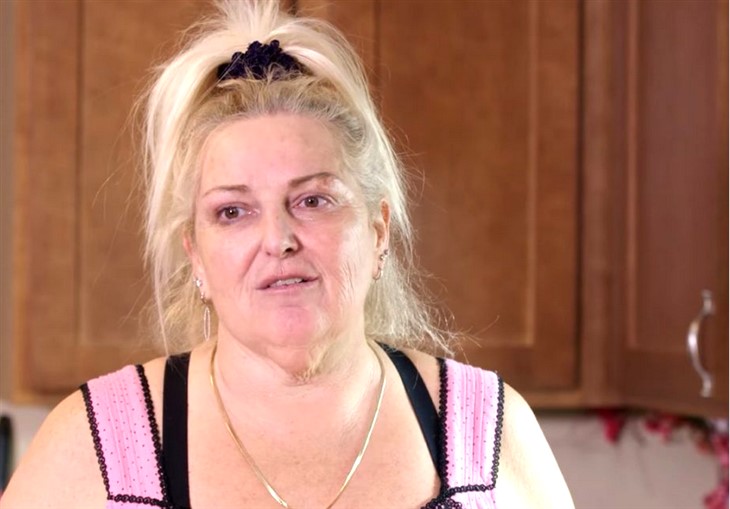 After all the odd behaviors Angela Deem showed on-screen, the “90 Day Fiance” participant got the chance to explain her side regarding her actions towards her husband, Michael Ilesanmi and his aunt Lydia during the “90 Day Bares All” in August.

As documented by ET, the host of the tell-all, Shaun Robinson, asked Angela what was the reason behind her destructive behavior and Angela pointed it all on her medications. She explained she filmed the tell-all following her breast surgery, and she was restricted to fly, but she traveled, anyway.

“But you know me, I’m always doing something on the edge,” she said.

“I did it, and then we stayed out a little bit too late and I couldn’t sleep., and then I started hurting and took a pain pill, and I had, like, 30 minutes of sleep,” Angela explained.

When asked about her argument with Michael’s aunt Lydia, Angela revealed that her behavior also shocked her. She confessed she had regrets about the cursing she did in front of the camera and apologized to aunt Lydia already, but she hasn’t got the chance to talk to her after the incident.

It all started when Angela told her husband about Dr. Obeng, whom she flirted with in the past and who was the one who did her breast reduction. Michael got upset with the revelation. Lydia confronted Angela and told her to respect her husband.

Out of anger, Angela Deem threw cursed words to Lydia and told her to mind her own business as she pulled down her outfit and unveiled her breast in front of the camera. Michael and the surrounding people were shocked and showed great disappointment, including Shaun Robinson and fellow “90 Day Fiance” cast member, Ronald.

Michael Ilesanmi Already Expressed His Thoughts About The Shocking Moment And described It As “Totally Atrocious.”

The two are still holding on despite the circumstances they face as a couple, like Angela’s flirting moment with “90 Day Fiance” star Elizabeth’s dad, Chuck, and her ‘green card’ accusation to Michael that she even let her husband take a lie detector test.

Angela Deem never ceased to disappoint the show’s viewers when she showed off her genitals in front of the camera during “90 Day Bares All.”

It happened when host Shaun Robinson asked about her plans for future surgeries and Angela excitedly showed her legs but exposed her genitals through her pantyhose. Though she seemed clueless about the exposure of her private part, the viewers still reacted to her carelessness.

In her latest Instagram post, Angela uploaded a video of her interview at “90 Day Bares All” and thanked Shaun Robinson and the entire crew for giving her an awesome time during the show.

The post gained a lot of different reactions on the comment section regarding the genital show off and the TLC fans want to drop Angela from the show not just because of the nudity issue but also for not treating her husband well.

Days Of Our Lives (DOOL) Spoilers: Brady Makes Another Play For Chloe