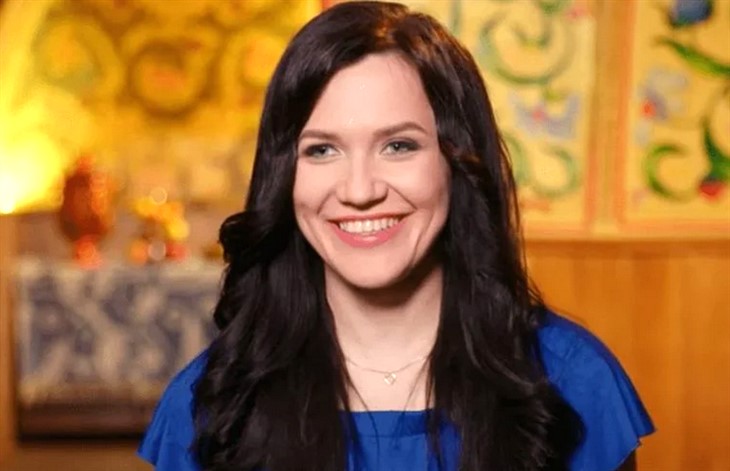 It is probably lucky that 90 Day Fiancé alum Varya Malina has a quirky sense of humor. Since we last saw her on the TLC reality show, the Russian beauty has moved back to the US and is living here on a visitor visa. Her Instagram account is alive with fun images and videos of Varya at the beach and in other fun social situations. In fact, it looks like she is having a ball. However, a recent post makes it clear that things are not as rosy as they look.

90 Day Fiancé fans will recall Varya making a trip to the US to surprise her boyfriend, Geoffrey Paschel. He had proposed to her in Russia and she had turned him down. However, she had a change of heart and wanted to make it up to him. It was a genuine surprise for Geoffrey when Varya arrived at his Tennessee home.

However, it was also a shock for Malina, when she found he was with his female “friend” Mary. After an explosive fight, the pair did eventually get engaged towards the end of the show. Fans are still speculating whether she and Geoffrey are together, but if they are, they are certainly keeping it a secret.

90 Day Fiancé  – Varya Malina Is Back In The USA

Varya has since sold her apartment in Russia and is now living in Pensacola, Florida, on a visitor visa. She regularly shares her daily adventures on her Instagram and YouTube accounts. Most of these adventures look like a lot of fun, but it turns out there is more to the story.

Recently, Malina revealed that her 2012 car has broken down on a highway and she was stuck, without help, for more than two hours. Eventually, she discovered that her ancient car needed a new engine, an expense she really couldn’t afford. However, she also can’t afford to buy a new car, so she reportedly learned how to replace the car engine herself, which is pretty impressive. Many of her fans are proud of her and how she is living her life to the full in the US.

Recently, however, Varya posted a new video to her Instagram account, to compare her American dream with her American reality. Most 90 Day Fiancé fans can surely relate to the clip, included here. 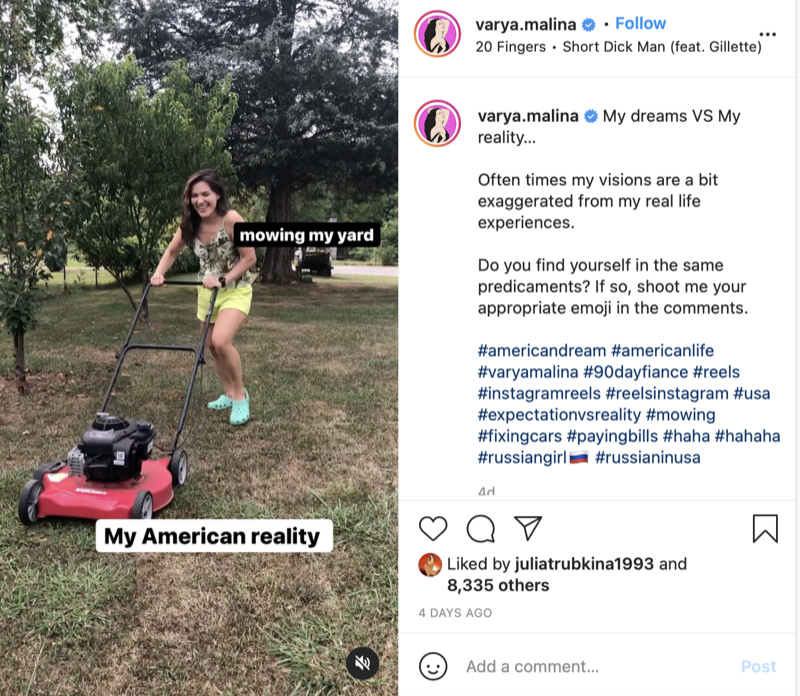 The first frame reveals Varya walking toward the camera, fanning herself with dollar bills outside a Starbucks. She titled this her “American dream.” The balance of the video reveals the truth about her life in America, including fixing her own car, mowing her yard and paying the bills. Welcome to our world, Varya Malina! The caption of the post read, “My dreams VS My reality,”

In the first shot, she walked toward the camera while fanning herself with dollar bills; the fans can see a Starbucks in the background. In the next few shots, Varya revealed how she is actually living her American life. She has to fix her car by herself, mow her yard, and pay the bills. She captioned the IG post as “My dreams VS My reality.” Varya wrote, “Often times my visions are a bit exaggerated from my real life experiences.” She asked her fans if they find themselves in the same predicaments, telling them to shoot an appropriate emoji in the comments.

Fans responded, with one writing, “It’s not as glamorous as some of the movies show.” Another wrote, “OMG that is hilarious and so true!” When another fan asked Varya, “Aren’t those things you do in every country,” Varya was quick to respond. She said she didn’t have to drive in Russia, because the public transport is good. However, in America, she has to travel by car and she then mentioned how it broke down a few weeks ago.
Is Varya an American citizen?

Many of Varya’s fans wonder if she has become an American citizen, but she says she is only staying on a visitor visa. If, by some chance, she is still engaged to Geoffrey and marries him, she could then apply for a green card. However, neither Varya nor Geoffrey is revealing the truth about their relationship, possibly in the hope of appearing in a 90 Day Fiancé spinoff at some stage.

Readers, would you like to see Varya and Geoffrey on another TLC reality show? Drop us a comment below.