Young And The Restless Spoilers & News: Melody Thomas Scott Almost Starred On A Sitcom Instead Of Y&R 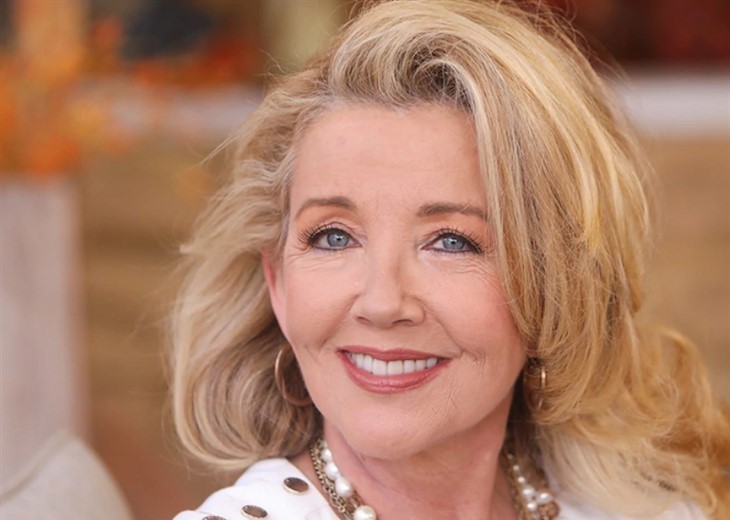 CBS The Young and the Restless spoilers reveal that powerhouse actress Melody Thomas Scott has starred for over 40 years on the CBS soap as Nikki Newman. She recently talked to Hollywood Life about her new autobiography, her life and career, and we have all of the details for you here.

Melody started off by talking about her incredible stint on the number one rated daytime drama. When she began on the show was just 22 and said that she didn’t even want the job!

“There’s a little part in the book about that,” she said. “I had just gotten a sitcom pilot with NBC that same weekend. I wanted to do it because it was a comedy and I love comedy. Lucille Ball is one of my greatest icons, and I was so excited about that. And then I got Y&R. My agent is the one who talked me into doing Y&R. I was so sad to let that pilot go. But you know what? Always listen to your agent because that pilot never even sold, so that would have gone nowhere.”

As she notes, she met her husband Y&R executive producer Ed Scott on the show. “So much was attributed in my personal life to taking that part, more so than any other actor on our show, I think because it really affected my personal life. It gave me stability that I really needed, obviously. I was just so lucky to have made that decision.”

So how long does she think she will continue to be on the show? According to Scott, “I’ve always said, as long as I’m happy there, that there is no reason to leave. So I hope that continues. I love being part of a company. I love the community of it because I grew up with no family community of any kind, so that’s a very comfortable thing that I kind of stumbled onto.”

She added, “Now all these years later, I have lifelong friends. We are very much a family. I know a lot of shows like to say that, but we really are. We see a lot of those people more than we see our real-life family in some ways. We are definitely tethered to each other’s hearts and souls.

The Young And The Restless Spoilers: Nate's Good Will and Elena's Efforts Pay Off – Devon Makes Peace #YR #YoungAndTheRestless https://t.co/7XfIjzHhc5

It’s a strong bond. I can’t imagine breaking it. I’d have to be very unhappy to walk away from that, and I can’t even imagine what that would be.”

Y&R will air its 12,000th on December 1 and no doubt Scott will be prominently featured on the episode—you definitely don’t want to miss it!