TLC ’90 Day Fiance – Happily Ever After’ Spoilers: Andrei Wants The Potthasts To Go Back To The US! 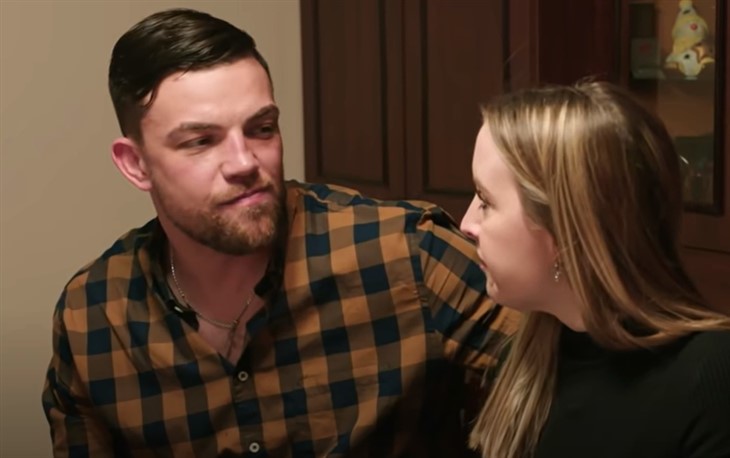 TLC’s “90 Day Fiancé-Happily Ever After” star Andre Castravet wants the Potthasts to go back to the US in a recent sneak peek of the show. He even tells his wife Elizabeth Potthast Castravet he doesn’t want them in Moldova, and her mother and sister haven’t even arrived yet for their Moldovan wedding!

The friction between Elizabeth’s father, Chuck Potthast, her brother, Charlie Potthast, and Andrei started as soon as they left the airport, where Andrei and Elizabeth had picked them up. They both were highly suspicious of Andrei’s past, especially after he divulged that he had been a police detective in Chisinau prior to taking a job as a bouncer in Ireland, which is where he and Elizabeth met.

Chuck in particular smelled a rat when he assumed Andrei had left a high paying job in Moldova to take a menial security type job in Ireland, and he and Chuck both figured he’d fled to avoid some type of prosecution in Moldova! They kept up that line of questioning during dinner with Andrei’s parents and his brother Radu and sister-in-law Ina, and then when they didn’t get the answers they were looking for, continued the interrogation at a dinner meeting with Radu, Ina, and their Moldovan friends at a restaurant!

Charlie and Andrei nearly came to blows, with Radu and some of the other men at the table pulling them apart, and Elizabeth and Radu begging them to calm down! Elizabeth became very frustrated, and even told Andrei he was crazy for starting a fight with her brother! Elizabeth later thought part of the problem between Andrei and Charlie as they are too much alike!

TLC 90 Day Fiance Spoilers – After The Initial Near Fist Fight, The Men Sit Back Down

After the initial near fistfight, Andrei and Charlie sit back down, but the argument continues, with Andrei threatening to (expletive) up Charlie and telling him to take it outside, and Charlie returning threats of his own and calling Andrei an orifice of elimination, to put it delicately! Chuck asked Andrei’s friend, Marcel, and Radu if they thought Andrei’s behavior was acceptable!

Chuck made it a challenge in that he accused Andrei of trying to beat Charlie up for no reason, and that they don’t do things that way in America, and guests there are treated with respect! Elizabeth intervened, saying both Charlie and Andrei were at fault. She then told Charlie he was as much of a hothead as Andrei, Charlie denying his own bad temper, and went on about how intimidating the 6’4” Andrei is.

Marcel took Andrei’s side to an extent – and told the Potthast men that they should stop provoking Andrei. Marcel said they had asked the same questions ten times, and he would have been just as angry as Andrei, had someone treated him in that manner. Radu then attempted to chalk up the argument to differences in culture and the two men have had a bit too much alcohol to drink. Then Charlie blameshifted back to Andrei again, calling Radu’s opinion a load of BS!

He then headed outside to calm himself down, telling the TLC producers that no one was going to tell him what to say or what to want, and if someone wants to fight him, bring it on! Charlie continued, saying he’s not afraid of Andrei or “his punk friends” and accused them of covering up for Andrei. Chuck agreed it was best that Charlie headed outside to cool down a bit, admitting that Charlie does have a bad temper, while Radu continued to try to calm everyone else down.

TLC 90 Day Fiance – The Other Way’ Spoilers: Jihoon & Deavan Done? He Unfollows Her & Deletes All Her Posts https://t.co/OnUWzTimYu pic.twitter.com/DQN4K83xdx

Ina also told Andrei to back off a bit, especially in front of Chuck, and Chuck pointed out regardless of anything since he was married to his daughter, he and Andrei would always have a relationship. He said they had to learn to get along because you can’t pick your family! Andrei didn’t like it and told him it was not a good time to talk about his relationship with them!

Chuck seemed blindsided – and said he hadn’t seen Andrei act like that back in America! He wondered if Andrei’s true colors were showing now, and he didn’t like what he saw! Andrei wanted Elizabeth to defend him to her family, but better yet to tell them to get out of Moldova and go home – in front of Chuck, which wasn’t taken well considering it was Chuck who paid for the trip and the Moldovan wedding!

The argument escalated, and Elizabeth told Chuck and Charlie to go back to their Airbnb and told Andrei she wasn’t going to sit and watch Andrei continue to fight with her family members!

Is the fight over between Charlie and Andrei, or is it just getting started? Stay tuned to TLC’s “90 Day Fiancé-Happily Ever After” and check back here for all the latest news, updates and gossip about all your fave “90 Day Fiancé” shows and stars!