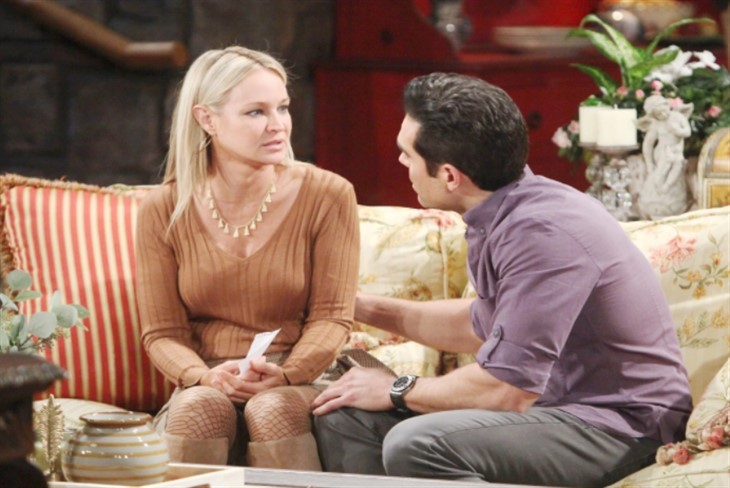 The Young and the Restless spoilers document that a number of couples are potential, or even probable marriage candidates, following the lead of Chance Chancellor (currently played Justin Gaston, with Donny Boaz soon to be seen on screen again) and Abby Newman (Melissa Ordway), who’s now part of the Chancellor family.

Sharon Newman (Sharon Case) and Rey Rosales (Jordi Vilasuso) must be mentioned first, as their nuptials are set for New Year’s Eve. Kyle Abbott (Michael Mealor) and Summer Newman (Hunter King) called off their elopement, but are still engaged and seem destined for remarriage at almost any point. Chelsea Lawson (Melissa Claire Egan) could also remarry Adam Newman (Mark Grossman) as part of his recovery process.

The Young And The Restless Spoilers – Shey Is Tentatively Set

Sharon beat cancer. That’s a fact, based on all that her doctors have determined. But it’s fair to classify her wedding plans as tentative.

Rey was hesitant to commit to Sharon, based on her emotional tie to Adam. But in time she convinced him that Shadam was over. But was it, or is it?

Case’s character made the move in the fall to push for marriage. Rather than have a quickie Halloween wedding, the decision to marry was scheduled for the last day of 2020. That intermediary time has already allowed Sharon to be pulled into Adam’s world again, with his mental health treatment the compelling case in this instance.

So, as of now, Shey is the next couple that should get married. Betting odds are arguably fifty-fifty that it happens.

The elopement idea was something Kyle blurted out. Summer accepted, but changed her mind during Skyle’s fake out-of-town business trip. As viewers saw in the hallway shot, she was totally opposed to the idea.

Summer’s choice to return to Genoa City, Wisconsin, without Kyle naturally set him off. It seemed that Skyle was once again in danger of collapsing. But Dina Mergeron’s (Marla Adams) death enabled Kyle to regain perspective on life.

Recent weeks are increasingly demonstrating that Kyle and Summer are the soul mates they’ve long believed they are. With that, this couple could marry before Sharon and Rey say their vows.

Chelsea was fully leery of being in the same town as Adam, when she returned in 2019. But Egan’s character had to see for herself that he had somehow survived the 2014 cabin blast.

Now, with Adam involuntarily committed, Chelsea realizes that she can not live without him. As long as Adam is honest about addressing his mental health issues and makes consistent progress, it’s possible that Chadam could be restored on a more sound foundation than ever before.

But we’re talking about Adam. So, Chadam could remarry this year, next year, or never.

Royal Family News: Kate Middleton’s Mom Will Make Sure That George, Charlotte And Louis Have Christmas In Spite Of COVID