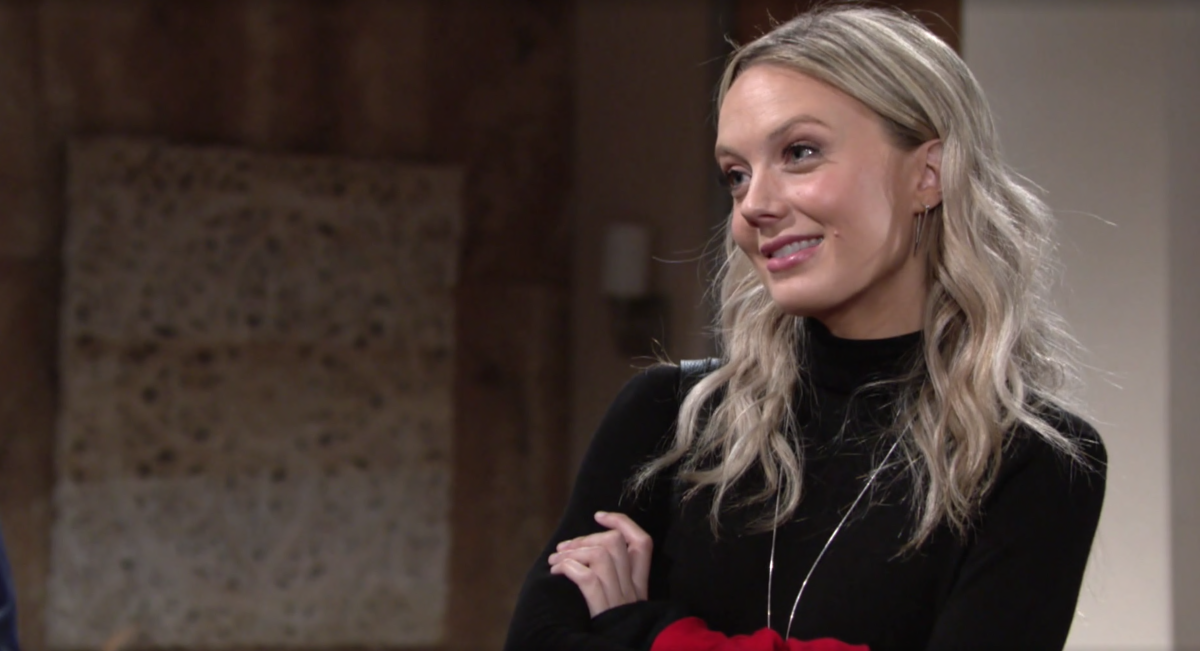 The Young and the Restless Spoilers – Chelsea and Adam’s future

At the penthouse, Adam Newman (Mark Grossman) and Chelsea Lawson (Melissa Claire Egan) discuss Victor Newman (Eric Braeden) giving the CEO position to Nick Newman (Joshua Morrow). Chelsea believes that Nick doesn’t want to be CEO, and Adam says Nick accepted the offer so Adam wouldn’t get the job. Chelsea tells Adam he needs to be patient as he plans his next move. Their conversation is interrupted when he receives a call from Chance Chancellor (Donny Boaz).

Later Chelsea meets Chloe Mitchell (Elizabeth Hendrickson) at Crimson Lights. Chelsea informs her friend her good news that she and Adam are engaged. When Chloe makes a joke about that not being good news, Chelsea becomes defensive. She says she knows neither she nor Adam are perfect, but they fit well together. Chelsea becomes emotional and says she’s happy for Chelsea, but that Adam better take care of Chelsea or else.

Nick stops by Newman Enterprises to meet with Victor. Nick comments about the press release, which makes it sound like Nick being CEO is permanent. Victor reassures him that Victoria will still have the job once she recovers. The two men discuss Adam coming after them, and they’ll be prepared to fight him with everything they have. Victor says the most important thing is protecting his legacy.

Adam arrives back at the penthouse and Chelsea is getting started planning their wedding. She has already booked their plane tickets for Kansas. She tells Adam she loves him and they’ll have everything they’ve ever wanted.

Nick is at the ranch visiting Victoria and Nikki Newman (Melody Thomas Scott). Nick comments that Victoria needs to make a speedy and come back to Newman Enterprises or he may mess everything up. Victoria admonishes Nick for his joke and says running the company is a serious business, something he may not be prepared for. Victoria then apologizes for her outburst, but she becomes angry because she feels the company’s being taken away from her again. Victoria then goes upstairs to take a nap, while Nick and Nikki discuss her well-being. Nick expresses his concern and wants to know what Nate Hastings (Sean Dominic) thinks about her recovery.

Later Nate stops by to check on Victoria. He says she seems to be recovering well and mentions she may be able to return to work soon. Victoria becomes upset at the comment and says she’s going back to sleep. Nikki and Nate then talk in private, and she wants to know what’s causing Victoria’s strange behavior. Nate says with everything that’s happened she’s suffering from PTSD and tells Nikki to give Victoria time.

Adam meets Chance at Society, where he learns that Chance took care of Phyllis’ blackmail. Chance talks about Adam saving his life and feels that he owes him by tying up the last loose ends. The two then discuss Nick being named the new CEO and Chance mentions the press release.

Billy runs into Phyllis at the Grand Phoenix and is stunned to learn she’s the new owner because she brought Abby and Chelsea’s shares. When he comments about it being an ugly battle for the hotel, Phyllis retorts that Billy has no right to judge. She also says that Victoria and Amanda Sinclair (Mishel Morgan) deserve better than him. Phyllis takes her rant too far when she mentions Billy stabbing Victoria in the back. She and Billy then apologize to each other, and he wishes her luck with the hotel.

Later Abby comes in and Phyllis comments she should throw her out with the rest of the trash. Abby reminds Phyllis that if it wasn’t for her, there would be no hotel for her to run. When Abby mentions her new hotel across the road, Phyllis says she isn’t concerned. Phyllis brings up her room being broken into and warns Abby about her and Chance’s plan. She then says she’s one step ahead and has a safety deposit box.

Chance comes by later to see Abby, and she tells him Phyllis has a back-up copy of the recording in a safety deposit box. Chance says they need to find that box, and Abby does an impersonation of Phyllis and says that’s her plan. Chance is worried about the plan and wonders if Abby can manage to get the safety deposit box. Abby says she’ll try and nobody’s going to stop her.

Billy meets with Ashley at Jabot, expecting to get a lecture, but she wants to know how he’s feeling after everything that has transpired. Billy hugs her and says she’s the first person to ask how he was feeling. Billy explains how Ripley Turner (Christian Keyes) was found guilty. Billy says he wishes he’d listened to Victoria and left the gala. He talks about how terrifying it was and fears Victoria now hates him. Ashley doesn’t think that’s true.

She then tells Billy that to turn his life around she thinks he should take Jill Abbott’s (Jess Walton) job offer for Chancellor. Billy agrees to call Jill, then talk turns to Dina Mergeron (Marla Adams). She talks about how Dina doesn’t know who she is or where she is. Ashley tears up about she talks about the resentment she felt towards Dina, but she’s her mother and she loves her. Ashley says she’s not ready to say goodbye.

Emmerdale Spoilers: Charity Continues To Worry About Vanessa, Will She Try To Fight Her Cancer Alone?