The Young and the Restless (Y&R) spoilers for Monday, March 9, tease that Phyllis Summers (Michelle Stafford) and Nick Newman (Joshua Morrow) will reflect on their steamy night together. At Nick’s place, they note how unexpected it was before leaning in for a kiss. Christian Newman (Alex Wilson) appears, so they separate and Phyllis ultimately decides she should go.

On her way out, Phyllis encourages Nick to go after the Newman CEO spot. She doesn’t think Nick will get sucked back in since he’s his own man. Phyllis warns about Adam Newman (Mark Grossman) causing damage and people getting hurt – people like Victoria Newman (Amelia Heinle). She thinks Nick could be the one that prevents that damage. 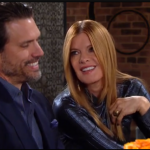 At the ranch, Victor Newman (Eric Braeden) talks to Adam about Connor Newman (Judah Mackey) briefly before Nick calls. It turns out Nick’s taking the CEO job after all. Adam’s livid to learn Victor’s handing the seat to his brother. He feels like Nick only wants it so he can’t have it. Adam rants about Victor playing him and doesn’t know if they can come back from this.

Chelsea Lawson (Melissa Claire Egan) enters along with Nikki Newman (Melody Thomas Scott), who later questions Victor in private. Victor admits he was going to hand the reins over to Adam, but Nick was always his first pick. At Crimson Lights, Chelsea runs into Phyllis and notices he sloppy sweatsuit. She takes jabs, but Phyllis confesses that she spent the night at Nick’s house.

Phyllis also brings up winning back the Grand Phoenix, which was rightfully hers. She makes it clear that Chelsea got outplayed and is the loser here. Chelsea eventually heads home to Adam and assumes he’ll want revenge on Victor. Adam thinks Chelsea probably wouldn’t be on board with that, but Chelsea insists he’s got it wrong. She’s definitely on board with helping Adam win.

Phyllis arrives in her suite and sees dirty towel evidence that was left behind. She rummages until she realizes her thumb drive’s gone and checks her laptop. Phyllis sees that it’s been given a good soaking, but she isn’t deterred by Chance Chancellor (Donny Boaz) and Abby Newman’s (Melissa Ordway) latest move. If they think they’ve won, they should think again!

In Amanda Sinclair’s (Mishael Morgan) suite, she bonds with Billy Abbott (Jason Thompson) after waking up next to him. Amanda slept well for the first time in a long time. She later reveals she feels free now that Ripley Turner’s (Christian Keyes) behind bars. Billy feels that same sort of freedom with Amanda. He thinks they’re worth taking a chance on and insists this feels right.

Billy plants a kiss, which surprises Amanda. She stares at Billy before kissing back more passionately. They establish that Billy should probably get going, so he steps into the hall and looks thoughtful. Back in her room, Amanda also seems to be mulling over that kiss.

At Society, Kyle Abbott (Michael Mealor) is irked over Lola Rosales (Sasha Calle) sleeping all cozied up to Theo Vanderway (Tyler Johnson). Summer Newman (Hunter King) convinces Kyle to exit, but Lola secretly knew Kyle was watching. She admits to Theo that she liked it, so he’s amused by that little bit of edge she’s got in her.

However, Lola turns down another kiss from Theo soon after. She wants to take the time she needs and figure out if the next step with Theo’s right. Theo is fine with being patient since Lola’s worth the wait. He joins Kyle at Jabot, where he makes a social media campaign pitch. Kyle isn’t keen on the idea, so Theo wonders his cousin is making this personal.

After Kyle shuts down that suggestion, he questions the real reason Theo’s into Lola. Is it because of her or Kyle? Theo feels like Lola’s a special woman, but he enjoys the added benefit of riling Kyle up. At Society again, Summer pops by and warns Lola that Theo can be a user. He doesn’t know how to let go of a grudge.

Lola isn’t interested in Summer’s point of view, but Summer wants to continue. She admits she’s seen another side of Theo when he’s with Lola. Summer hints that Lola brings out the best in him, so she’d be happy for Theo and Lola if they became a couple.

At Newman Enterprises, Nick reminds Victor this arrangement is temporary. That’s the reason he agreed to step up as CEO. Nick learns that Adam’s in the loop before Victor says there’s a lot to catch up on. He adds that they should get to work right away.

The Young and the Restless spoilers say some exciting drama’s ahead, so don’t miss what’s in store. We’ll give you updates as other Y&R news comes in. Stay tuned to see what else is brewing in Genoa City.