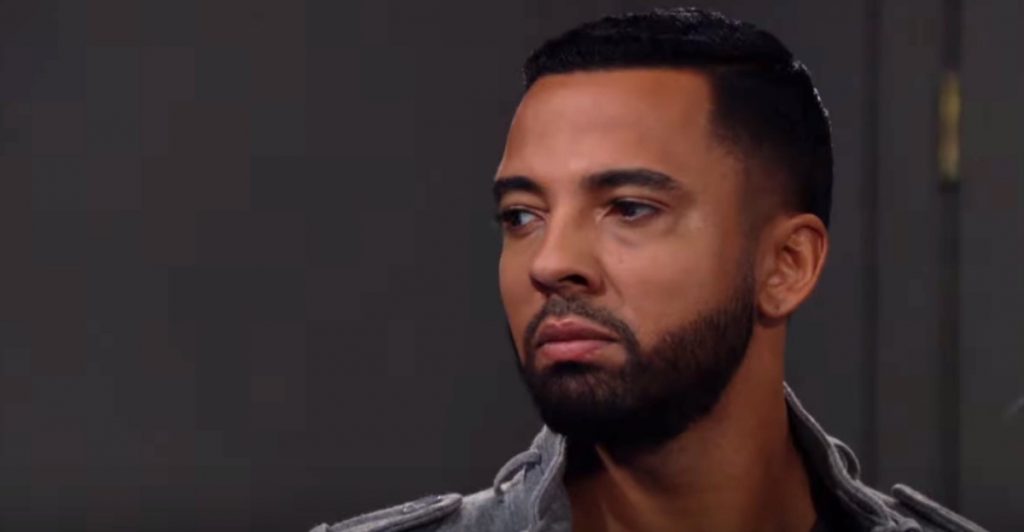 The Young and the Restless (Y&R) spoilers for Monday, March 2, tease that Victoria Newman (Amelia Heinle) will get some shocking updates. In her hospital room, Paul Williams (Doug Davidson) and Victor Newman (Eric Braeden) will appear. Nikki Newman (Melody Thomas Scott) will also be on hand as Victoria learns about Ripley Turner (Christian Keyes) mistaking her for Amanda Sinclair (Mishael Morgan).

Victoria also finds out Amanda came to the gala with Billy Abbott (Jason Thompson), who Victoria maintains she’s done with. Meanwhile, Billy talks to Jack Abbott (Peter Bergman) on the Crimson Lights patio. They discuss Dina Mergeron’s (Marla Adams) decline before Billy implies Jack’s using the situation to prove a point. Jack gripes since he wouldn’t use his mother to be manipulative.

The Young and the Restless Spoilers – Billy Abbott Apologizes

Billy apologizes, but he doesn’t feel Jack’s being subtle with his eventual AA meeting mention. After Billy heads out, Jack catches up with Sharon in the main dining room. She battles a hand cramp and ends up divulging her breast cancer diagnosis. Sharon admits Nikki and Phyllis Summers (Michelle Stafford) already know the truth. She’s looking forward to the day their feuds start up again, which will mean she’s better. As for Billy, Jack confesses his concerns and gets support from Sharon in return.

Speaking of support, Mariah Copeland (Camryn Grimes) receives some from Lola Rosales (Sasha Calle) and Lindsay (Kirby Bliss Blanton) the bartender. At Society, Lola suggests her marriage to Kyle Abbott (Michael Mealor) was doomed, but things are different between Mariah and Tessa Porter (Cait Fairbanks). Mariah feels like Tessa’s ghosting her and notes she doesn’t have a gig tonight.

Lindsay listens intently as Mariah reflects on Tessa’s history with Tanner and how they’re supposedly spending all this time together because of work. Later, Lindsay acknowledges that Mariah’s keeping stuff from Tessa, but she doesn’t think Mariah should beat herself up about that. She also doesn’t want Mariah to be alone, so she goes home with her since Society’s pretty dead.

At Mariah and Tessa’s apartment, Lindsay compliments it before Mariah reflects on possibly having to move out. She gets weepy over everything she’s been dealing with, so Lindsay hugs her. When Lindsay pulls back, she plants a quick kiss and catches Mariah off guard. Lindsay leans in for another kiss, which turns into them making out passionately and stripping clothes off.

Afterward, Lindsay’s buttoning up when Mariah comes out of the bathroom in a silk robe. She awkwardly suggests that was unanticipated, but Lindsay thinks they can talk about it later. They’re sitting on the sofa when Tessa opens the door. Mariah’s shocked as Tessa asks what’s going on here.

In Amanda’s hotel suite, she dreams Ripley’s there and begs him to go. Ripley insists Amanda ruined his life, so he has nothing to lose. He refuses to walk away, but Amanda ultimately awakens and lets Rey Rosales (Jordi Vilasuso) in. Rey reveals that Ripley got caught coming back to Genoa City with weapons in his car and was arrested.

Afterward, Billy drops by to see Amanda. He was concerned since there was no guard posted outside her door. Amanda brings Billy up to speed on Ripley being captured and thrown behind bars. She struggles to cope over Ripley coming back to kill her and wants Billy to leave. Billy protests, but he eventually goes along with her wishes.

At Jabot, Summer Newman (Hunter King) talks to Kyle about the blurred lines of their professional and personal lives. She thinks everything feels right and has no intention of burning out on the job. They discuss Dina and Billy before Summer spots Theo Vanderway (Tyler Johnson) in the hallway. Summer and Theo needle each other a bit before addressing Theo’s place at Jabot. If Kyle tries to get rid of him, Theo suggests he’ll fight back.

Back at the coffeehouse, Sharon gets choked up over being tired. Rey steps up for her and notes that he can drive her home. The Young and the Restless spoilers say Sharon will continue to rely on “Team Sharon” as this battle gets tougher. We’ll keep you posted as other Y&R news emerges. Stay tuned to see what else is brewing in GC.

General Hospital Spoilers: Trina and Cameron’s Lives On The Line – Will They Survive?