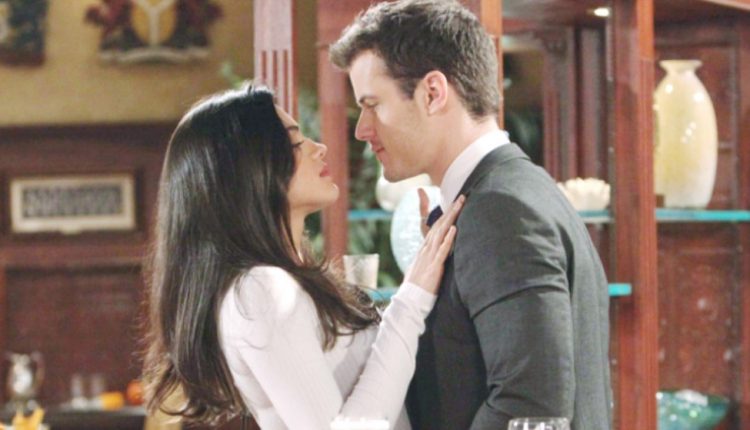 The Young and the Restless (Y&R) spoilers for Monday, February 3, tease that Nikki Newman (Melody Thomas Scott) will deliver some difficult updates. At Newman Enterprises, Victoria Newman (Amelia Heinle) learns Billy Abbott (Jason Thompson) was arrested after a barfight and bailed out by his lawyer, Amanda Sinclair (Mishael Morgan).

The Young and the Restless Spoilers – Someone Follows Amanda Sinclair

Nikki also fills Victoria in on Victor Newman (Eric Braeden) ordering someone to follow Amanda. She lets Victoria see a pic that was snapped of Billy and Amanda together. A dejected Victoria notes it’s convenient that Billy booked a suite at the same hotel Amanda’s staying in.

Meanwhile, Amanda talks to Billy at Crimson Lights. No charges were pressed, but Amanda thinks Billy should avoid the dive bar. Billy realizes Amanda’s eager to head out and frets about messing up their friendship. He gets that he sent mixed signals, but Amanda assures Billy she’s clear on where they stand. Neither one of them wants a relationship out of this. Amanda promises to get in touch.

Next, Amanda sits down to meet with Victoria. They hash things out at the Grand Phoenix lounge, where Victoria accuses Amanda of encouraging Billy to embrace his addiction. Amanda’s confused, so Victoria mentions Billy’s gambling problems and feels Amanda’s an enabler. Amanda maintains that she was just serving as a friend to Billy.

As for the aftermath of the barfight, Amanda insists she was just called to be Billy’s attorney. Victoria doesn’t seem too sure about that. Amanda clarifies that she’s not a romantic rival and is hopeful “Villy” can work things out. Victoria isn’t interested in doing that and thinks Amanda would be smart to stay away as well.

Billy ends up paying a visit to Jack Abbott (Peter Bergman), who notices his brother’s black eye. Jack hears about Billy leaving Victoria and trying to find himself. They bicker, but Billy insists he’s not gambling seriously and shuts down the idea of a meeting. Jack doesn’t have confidence that Billy’s chaotic new life will work out for him, so he contends that he’ll be there when it doesn’t.

At Kyle Abbott (Michael Mealor) and Lola Abbott’s (Sasha Calle) apartment, there’s plenty of tension. Lola eventually pushes Kyle to admit what happened in San Francisco since something clearly did. She doesn’t think it could be any worse than what she’s imagining.

Kyle assures Lola he didn’t sleep with Summer Newman (Hunter King), but he admits she kissed him. Lola thinks the fact that Kyle kept quiet about it proves he feels guilty. It’s more than just rejecting Summer. Their argument escalates, so Kyle blurts out that Lola should admit Theo Vanderway’s (Tyler Johnson) in Lola’s head as much as Summer’s in his.

Kyle then stammers that he didn’t mean to say that, but the damage is done. Lola leaves despite Kyle’s plea to keep talking. At Society, Theo needles Summer until she confesses there was a kiss in San Francisco. She doesn’t think Theo should take this news to Lola, but Theo feels Kyle can handle blowing this up on his own. Summer’s convinced that Theo’s developed real feelings for Kyle’s wife.

The Young and the Restless Spoilers: Highly-Rated Soap Renewed Through 2024! https://t.co/pvETVlzy0a pic.twitter.com/JUHBaXotjk

Afterward, Lola shows up and questions Theo about San Francisco. She wonders if he knows what happened, so he praises Summer and Kyle’s deal as being huge for Jabot. Lola thinks Theo’s a terrible liar. Over with Kyle again, he finds Summer and they establish that moving forward is the only choice.

The Young and the Restless spoilers say another great episode’s coming up. We’ll keep you posted as other Y&R details and rumors emerge. Stay tuned to see what else is brewing in Genoa City.

The Bold and the Beautiful Spoilers Monday, February 3: Brooke Poised To Start Drinking Again – Wyatt Turns To Liam For Support

The Young And The Restless (Y&R) Spoilers Tuesday, May 11: Victor Sets A Plot In…