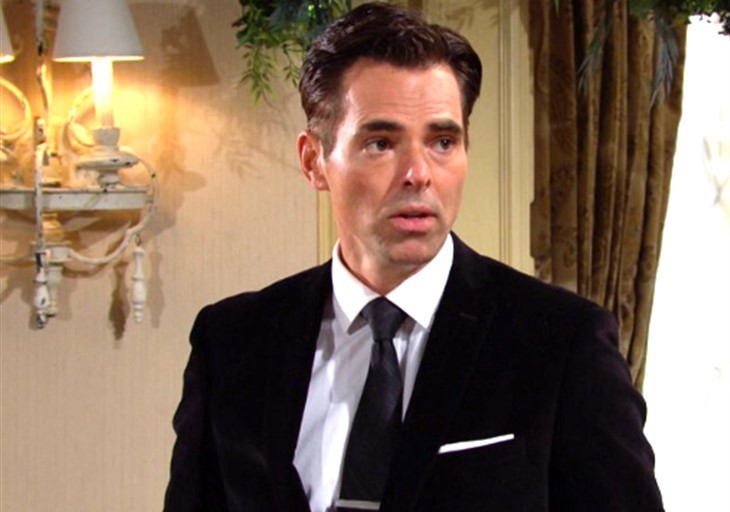 The Young and The Restless spoilers tease that in Genoa City, Wisconsin Billy Abbott (Jason Thompson) will be arrested for the attempted murder of Adam Newman (Mark Grossman). Attached to that charge will be the accidental shooting of Chance Chancellor (Donny Boaz). This will not sit well with Lily Winters (Christel Khalil). She will accuse Victor Newman (Eric Braeden) of framing him!

Lily requests a meeting with Victor. She knew something like this could potentially happen, and was afraid of negative optics, so she gave Billy time off. After all, there are too many people who know that Billy and Adam have a fraught history. Adam accidentally ran over Billy’s daughter with Chloe Mitchell, (Elizabeth Hendrickson) Delia Abbott (Sophie Pollono).

Billy has blamed Adam for running her down intentionally, and chased him down for it. He kidnapped Adam and forced him into his car, and took him down an icy road from the spot that Delia died, and they struggled. Billy’s gun went off, they went over the cliff, and Billy escaped from the icy waters but Adam did not. The car burst into flames and Adam was presumed dead until Chance found him in Las Vegas using the name Spyder. Lily also knows Victor has a lot of problems with “Billy Boy”. She accuses him of framing him for the shooting, because if Chance hadn’t been there, it would have been Adam who was shot! Lily is taking a risk by connecting the dots and accusing Victor of framing Billy for the shooting. Victor maintains that he did no such thing!

Lily knows that someone has a score to settle with Adam. She assumes it is Victor, because the person would have had access to Billy’s gun. Billy had told her that the bullet removed from Chance matched his gun, and that he was a person of interest in the case. He already confronted Victoria Newman (Amelia Heinle) about the gun, because he knew that it was in a closet in the home they once shared together. He also knew that there had been a break-in recently, which he assumed Adam committed. Victor already knows about the break-in and that Billy’s gun had been in the closet and that Billy says it was stolen.

It was found on Adam’s property, dismantled and in a dumpster! Victor is more of the opinion that if anyone framed anyone, it was Billy trying to frame Adam for shooting Chance! Why else would the gun have been disposed of on Adam’s property-was he’s trying to frame himself? That would make no sense at all! Lily thinks Victor has a score to settle with “Billy Boy” and won’t back down. Victor is loath to argue with his old friend Neil Winters’ (Kristoff St. John) daughter, but they are at a stalemate. As much as Victor would have liked to have framed Billy in that way and made it stick, he didn’t do it this time!