The Young and The Restless Spoilers: Amanda Looking For Answers, Opens Up To Nate 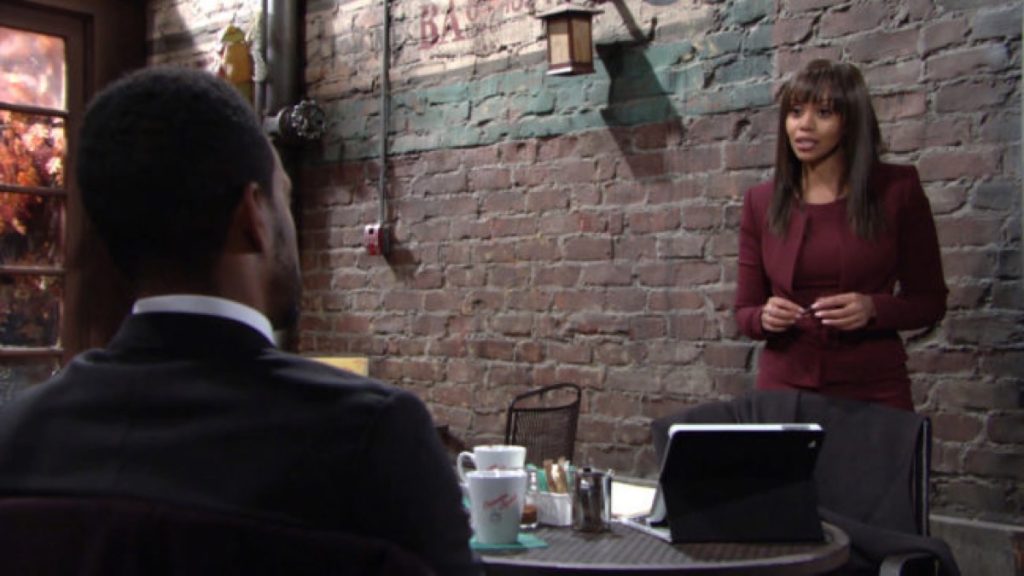 Viewers of The Young and The Restless will recall that Amanda revealed a little bit of her past when Elena Dawson (Brytni Sarpy) and Devon Hamilton (Bryton James) arrived at Crimson Lights with Jared, (Michael Maclane) who had come to the free clinic that they are getting ready to open up officially – after some renovations –wanting help for his grandfather, who needed medical care.

They brought him to get some food after Nate, who had been chatting with Amanda earlier, went to attend to Jared’s grandfather and then Elena, Devon, and Jared returned and later Nate. Jared told Amanda that he had been in foster care and doesn’t go to school, and Amanda can relate.

After Nate tells Jared his grandfather is stabilized and gets ready to take him back to the hospital, Amanda tells him she wants to focus on helping people like Jared and has decided not to go to Ripley Turner’s (Christian Keyes) arraignment after all, which she had previously planned on.

It sounds like Amanda too has been in the foster care system in her past, and this might be what she is going to open up to Nate about – her past! Many fans of The Young and The Restless have speculated that Amanda may be a previously unknown twin, possibly separated at birth, of Devon’s late wife, Hilary Hamilton (Mishael Morgan) and perhaps in upcoming episodes, it will be revealed that is the reason for her striking resemblance to her!

Amanda Sinclair may want to help people like Jared, who are disadvantaged and in his case, had been in the foster care system, because she has been there herself in her past.

She may be a highly paid attorney, but that doesn’t mean that she didn’t grow up poor and possibly went through abuse in her past – in addition to Ripley’s stalking. Viewers will recall that several months ago, during the hostage crisis when Simon Black (Jeffrey Vincent Parise) came to get his money back from Chelsea Lawson (Melissa Claire Egan) Amanda had been on lockdown in her hotel suite at the Grand Phoenix and Cane Ashby (Daniel Goddard) had been locked in with her and noticed how frightened she was to be locked up without herself initiating it and perceptively told her he could tell that someone had locked her up before in her past – she didn’t admit it.

She didn’t know who she could trust in Genoa City at that time or if she could trust anyone. It is quite possible that she was in some abusive foster homes because no matter how aggressively social service agencies try to screen potential foster parents, some slip through the cracks and unfortunately only are in it for the money they receive to care for the child and not the child! Perhaps when she opens up to Nate, there will be some answers!