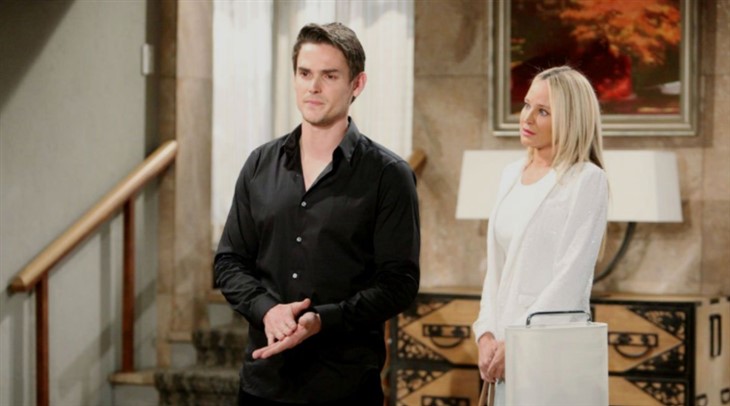 CBS The Young and the Restless spoilers document that Adam Newman (Mark Grossman) will ask Sharon Newman (Sharon Case) to help him as the first week of new episodes arrive. Fans know that this one-time couple’s bond was mined last year when Adam was suffering from amnesia. The implication now is that he’ll attempt to use their connection to determine if his father’s claims about Kansas are true.

Shadam had a brief, romantic reunion while both people were separated many months ago. So, it’s not possible to discount the potential of this latent flame through this new partnership, though that might be a reach.

The Young And The Restless Spoilers – Rey Rosales Protective Of Shey

Like Nick Newman (Joshua Morrow), Rey Rosales (Jordi Vilasuso) is protective of Sharon. Shey represents a healthy relationship for both people and could develop into an eventual marriage.

Rey will not be on board with Sharon helping Adam because he rightfully believes that connection represents instability. Vilasuso’s character won’t remain silent about any help Adam wants, especially considering Sharon’s current cancer battle.

With whatever Rey may learn, Sharon’s longtime feelings for Adam will likely overcome any logical arguments against helping him. It’s reasonable to claim that Shadam was Sharon’s deepest-ever relationship after Shick.

The factor noted above led Victor Newman (Eric Braeden) to ask Sharon to intervene in Adam’s situation last year. That was during the period where Y&R introduced Grossman as the newest Adam recast. At that time in the plot, Adam’s amnesia caused him to believe that he was a professional poker player who went by the name Spider.

Despite his condition, Sharon was able to get through to Adam, who instinctively trusted her. Her role in his decision to return to Genoa City, Wisconsin, can’t be understated. So, it makes perfect sense that he would ask for her help in trying to unlock his mind again.

The Young And The Restless Spoilers – Kansas Secret Locked Away

Adam must believe, on some level, that his father is telling the truth. If he didn’t he wouldn’t be trying to determine if the memory of A.J. Montalvo’s (no actor’s name known for this retrospective role) murder is in some part of his mind.

The Young And The Restless Spoilers: Two Love Triangles Ahead! Here Are The Detailshttps://t.co/dxgQVOksdG

Sharon’s place in Adam’s heart is second only to Chelsea Lawson (Melissa Claire Egan), which also suggests that she won’t be overjoyed that her greatest love is seeking another woman’s advice and input.

Should Anyone Believe Meghan Markle Or Prince Harry Again After Colluding On Finding Freedom?