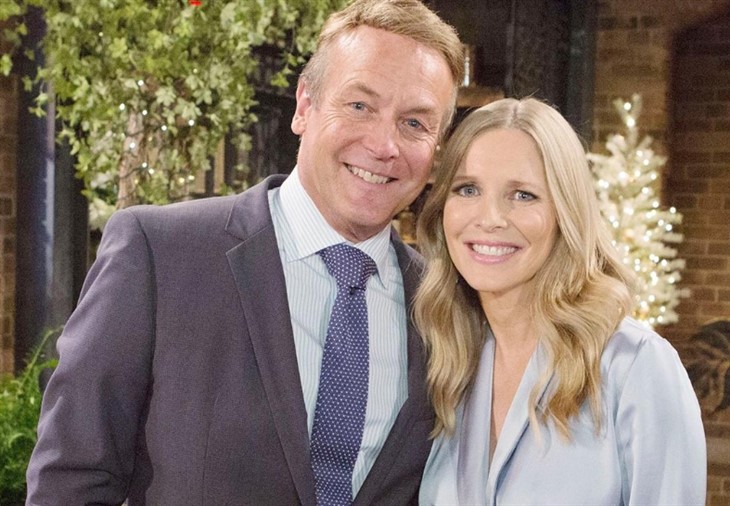 CBS The Young and the Restless spoilers and updates tease that fans of Christine Blair Williams (Lauralee Bell) and Paul Williams (Doug Davidson) will be glued to the television this week as their favorite couple is being featured during a week of flashback episodes.

The course of true love has not always gone smoothly for Christine and Paul. They have had a bit of a roller-coaster life even though they have been happily married now for years.

Here are the eight things you need to know about Christine Blair Williams as you enjoy seeing her story unfold this week!

1. Christine had a buggy nickname–“Cricket.” In the past, her enemy Phyllis Newman (Michelle Stafford) called her, “The Bug” based on her nickname.

2. In 1983 Christine debuted on Y&R as a Jabot Cosmetics model. Bell is the only actress to have portrayed Christine during the decades she’s been on the sudser.

3. Christine and Paul’s original marriage crumbled due to their burgeoning careers.

4. When Christine worked as a lawyer her colleague Michael Baldwin (Christian Leblanc) sexually harassed her.

5. Christine and Michael have quite a history. After his harassment came to light he was fired, but he then stalked and kidnapped her. Then, when he claimed to be a changed man, the two of them began a legal practice together.

6. In 2007 Bell took her character to L.A. when she starred on Y&R’s sister soap The Bold and the Beautiful. There she defended Ridge Forrester (then played by Ronn Moss, now portrayed by Thorsten Kaye).

7. Christine and Paul were once run down by Phyllis who couldn’t resist when she saw them through her windshield.

8. Christine and Paul remarried in 2013 and so far they are living out their happily ever after, with him the chief of police and her the retired DA.

The Young And The Restless Spoilers – What’s Next For Christine Blair Williams In Genoa City?

What will fans see regarding Christine once the show begins to film and air new episodes? When they last saw Christine she had given up her DA role but had not committed to another career. She was happy to support her husband in his career and their marriage appeared to be rock solid.

The Young and The Restless Leak: Victor Freaks – Victoria Goes To The Dark Side, Forms An Alliance With Adam?https://t.co/jj9iZ1hd0O

But since soap couples rarely stay happy for long, don’t be surprised if Christine and Paul have a dark cloud on their horizon!

Tell us what you would like to see happen for Christine and Paul!