The Young And Restless Spoilers: Faith Being Bullied Over Baby Switch – Can She Handle It On Her Own? 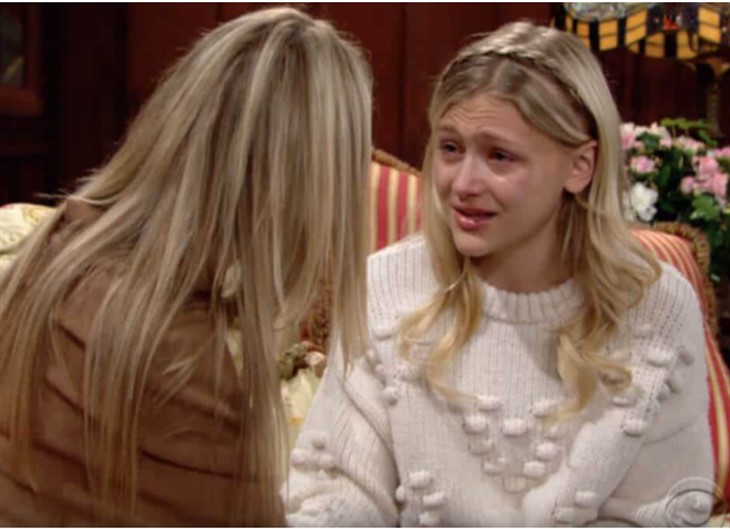 CBS The Young and The Restless spoilers tease that Faith Newman (Alyvia Allyn Lind) is having a tough time with the bullying she’s receiving. Her uncle, Adam Newman (Mark Grossman) switched her with Ashley Abbott’s (Eileen Davidson) dead baby and it came out in the exposé Billy Abbott (Jason Thompson) published. Unfortunately, her classmates and frenemies figured it out and they’re taking advantage to bully!

Viewers will recall that Faith’s phone literally blew up with taunts and bullying. Faith, trying to stay strong for her mother Sharon Newman (Sharon Case) remained stoic. She didn’t say a word when she made an excuse to go out after her parents tried to warn her. She’d already read it on her phone. Even though the exposé didn’t mention her by name, everybody at school figured out it was her!

Everyone who has read it and knows Faith is worried. Jack Abbott (Peter Bergman) was concerned about Faith and talked to Ashley about it – she was concerned for Faith also. She didn’t feel a bit sorry for Adam, however – as she had been a victim too. She had to hand the baby she thought was hers over to Sharon and Nick Newman (Joshua Morrow).

Older half-sister Mariah Copeland (Camryn Grimes) could tell that Faith was trying to handle everything on her own and told Nick. He finally got her to open up – and she was upset. She couldn’t wrap her head around what Adam had done – any of it. She can’t understand her mother continuing a friendship with Adam given what he did that affected her as a baby – mainly the switch. And now, she wonders if any of her friends are really friends at all!

Y&R Spoilers – Teenagers Can Be Mean

Teenagers can be mean – and teenage girls can be the meanest. Instead of either not bringing up the issue at all or supporting Faith, they’re bullying her. Suddenly she has become different in their eyes – and to maintain their own popularity, they have to treat her with derision. If even one girl stands up for Faith, she loses her own standing in the popularity pecking order!

Faith is probably afraid to check her social media – things will be even worse online. She doesn’t realize that Adam, too, is concerned about her well-being. He and Sharon met to discuss the exposé and for Sharon to tell him she can’t continue to be his therapist. She’s going in for more surgery, but she knows he has a heart and is still his friend. Faith wouldn’t understand that at all if she knew! Sharon sometimes has too big of a heart for her own good.

She tends to give the wrong people the benefit of the doubt. But Faith has another issue to deal with as well – Billy was married to her aunt Victoria Newman, (Amelia Heinle) for several years. Faith knows him as her Uncle Billy. So now not only does she have two men she knows as uncles at each other throats, she has a mother with cancer and now bullies! Faith will continue to try to handle it all on her own because she doesn’t want to pile any more on her family. But can she do it? That’s a lot for a young teen to bear!

Stay tuned to The Young and The Restless, and keep checking Y & R spoilers frequently for all the latest news, updates, and developments!

The Bold And The Beautiful Spoilers: Shauna Wants To Tell The Truth – Ridge Willing To Give Marriage A Chance