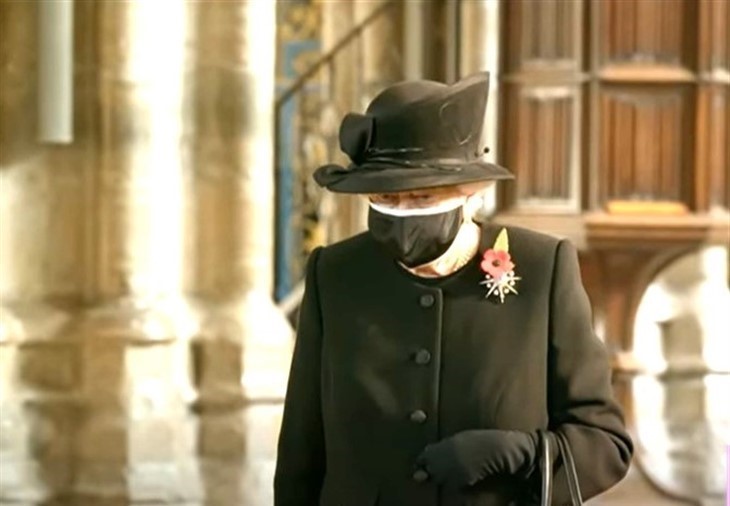 British royal family news reveals that Her Majesty Queen Elizabeth was photographed wearing a face mask for the first time last week during a ceremony at Westminster Abbey just before her appearance at Remembrance Sunday. The occasion was the centenary of the burial of the Unknown Warrior.

At that time Elizabeth honored the British serviceman whose identity is a mystery. The sovereign was dressed in black as she placed a bouquet on the grave and her mask came at after the government implemented COVID restrictions for a second time. Previously she was seen at public events without the protective face covering.

Her first time wearing a mask in public comes on the heels of the announcement that her grandson Prince William contracted COVID in April. Her son Prince Charles was also diagnosed with the virus this spring but that incident was made public knowledge at the time, unlike William’s late, controversial admission.

The Queen, Prince Charles, and Prime Minister Boris Johnson paid their respects to Britain’s war heroes at the Cenotaph on Sunday and the queen was not wearing a mask then, but social distancing was in place.

The public was not able to attend the event due to the strict lockdown restrictions but millions of people across the country paid their respects from home.

At the annual Cenotaph ceremony there would normally be about 10,000 veterans present but this year the number was limited to only 26. Prior to her death in 2002, Elizabeth’s mother, The Queen Mother, requested that her funeral wreath be placed on the grave of the Unknown Warrior.

At precisely 11 am, the prime minister, Prince Charles, Prince William, and others observed a two-minute silence before laying down wreaths.

The Queen watched on from the royal box as Prince Charles laid a wreath on her behalf. This year Prince Harry, who deserted his royal duties and military roles, was denied a request to have a wreath placed on his behalf. Instead, he and his wife Meghan Markle visited the Los Angeles National cemetery in a photo op meant no doubt to be a gesture to fallen Commonwealth soldiers.

During the event earlier in the week, the queen joined the Dean of Westminster in prayer and a moment of quiet after a bouquet was laid on the grave of the Unknown Warrior. The grave of the Unknown Warrior is the final resting place of a British serviceman who died in battle during WWI. The unidentified soldier’s body was brought from France to the burial site on November 11, 1920.

The Bold And The Beautiful Spoilers: Wyatt Tries Getting Rid Of Quinn, Will His Plan Work?

Eastenders Spoilers: Mick Abused All Over Again, Katy Gaslights Him Into Silence

Royal Family News: Should Netflix Warn The Crown Viewers That It’s A…