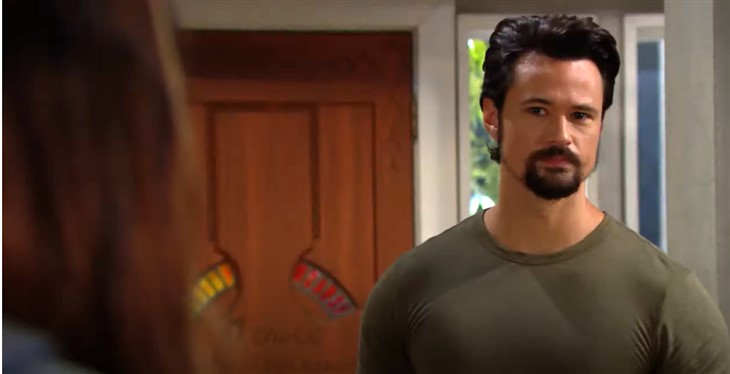 CBS The Bold and the Beautiful spoilers tease that Thomas Forrester’s (Matthew Atkinson) imminent return may also be followed by a revived relationship with Caitlin Ramirez (Kayla Ewell). It would have seemed like a stretch to write this character back into the show since she hasn’t been seen since 2005. However, Ewell’s husband just joined the cast

Tanner Novlan (John Finnegan) debuted this week as the doctor who treats Steffy Forrester (Jacqueline MacInnes Wood) after her motorcycle crash. Finn, which is the nickname of Novlan’s new character, will soon have a romantic connection with Steffy as well.

Fans of this site know that the health and safety protocols that were instituted on B&B’s set include a unique accommodation for romantic scenes. Since the actors aren’t supposed to touch each other an interesting option now exists.

Actors can choose to work with a mannequin during romantic scenes or have their real-life spouse, or significant other, on set. Whether Finn and Steffy are written into any romantic scenes, or have an extended relationship, will soon be seen. But if either happens, then both actor’s spouses can be invited to participate.

In Novlan’s case, that would be a homecoming for his wife. Ewell last played Caitlin on B&B 15 years ago.

Bradley Bell, B&B’s executive producer, is familiar with Ewell’s alumni status. The actor’s lengthy career began in 1999 and continues to the present, with many credits on her resume.

Of course, Caitlin and Thomas were much younger when they were the focus of one of the storylines many years ago. So, writing Ewell’s character back would require a dialogue memory refresher for hardcore and newer viewers.

If Novlan is to become at least a longterm, recurring member of the cast, then Ewell could be on the set during this period of safety precautions. That alone would make it easy for her role to be revived.

The Bold And The Beautiful Spoilers – New Direction Direly Needed

The Bold And The Beautiful News Update: Don Diamont Reaches Out to Fans About Bill And Katie Reunion #bb #boldandbeautiful

Instead, Atkinson’s returning character can attempt to re-establish trust with his loved ones. Having Thomas reconnect with Caitlin would also be believable and allow a fresh storyline to be presented to the audience.