The Bold And The Beautiful Spoilers: Ridge Breaks Down Seeing Steffy’s Condition – Fears For Daughter’s Life 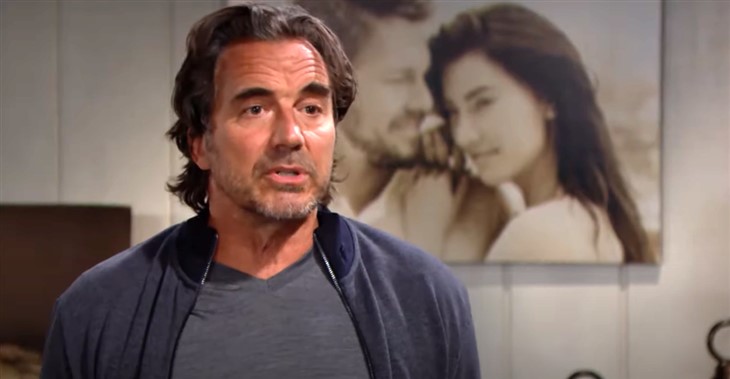 CBS The Bold and the Beautiful spoilers reveal that Bill Spencer (Don Diamont) calls Ridge Forrester (Thorsten Kaye) to give him the news about his daughter. The designer rushes to the hospital and walks in Steffy Forrester’s (Jacqueline MacInnes Wood) room. Seeing her condition from the motorcycle accident, Ridge completely breaks down.

The Bold And The Beautiful Spoilers -Bill Spencer’s Phone Call

B&B spoilers reveal that Bill is distraught and consumed with guilt over him crashing into Steffy. He calms his nerves and calls Ridge to inform him that Steffy has been in an accident and is in the hospital. It is likely that Bill decides to wait before telling the designer that he was the one who caused the accident.

Ridge and Brooke Logan Forrester (Katherine Kelly Lang) rush to the hospital and walk into Steffy’s room. A preview photo is circulating on social media that shows Steffy laying in a hospital bed. We only see the top half of her body. She has tubes in her mouth and nose. Her eyes are closed and she seems to be unconscious. No injuries are seen on her face, but she probably has broken bones.

The Bold and the Beautiful spoilers indicate that Steffy will pull through. She has a future storyline with Dr. John Finnegan aka “Finn,” and the two become an item. So, Steffy isn’t going to die from her injuries. However, we don’t know if she will wake up right away,, if she’s in a coma, or if she will need physical therapy.

It is teased that Ridge and Brooke both fight back tears when they see Steffy lying in her hospital bed. It sounds like they get emotional over the young woman’s injuries. So, while she looks okay from the chest up, she probably has a broken leg and some other injuries.

It is believed that “Bridge” might bond over Steffy’s accident. They will need to rely on each other for support. Even though Brooke is not Steffy’s mother and the two haven’t always seen eye-to-eye, she doesn’t want any harm to come to Steffy. Let’s hope that Ridge will understand that Bill hitting Steffy was an accident. There is enough tension between the two men and this could make the volatile situation much worse.