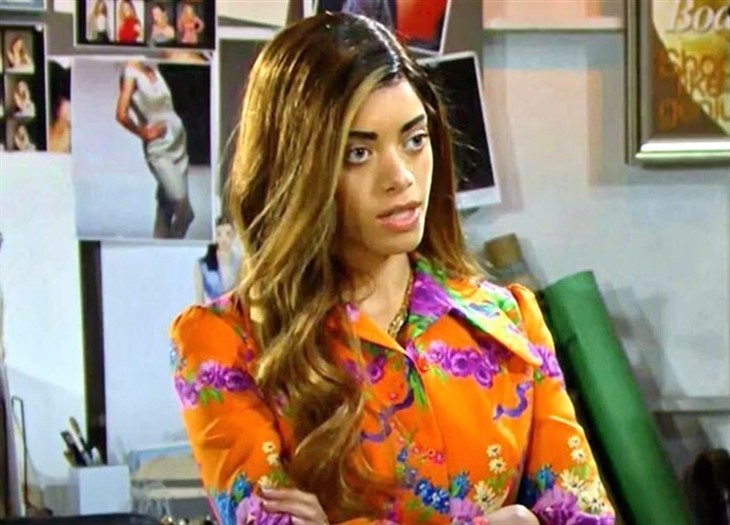 The Bold and the Beautiful spoilers reveal that Carter Walton (Lawrence Saint-Victor) thinks he’s marrying the perfect woman. He sees no faults in Zoe Buckingham (Kiara Barnes). When something does come up, he explains or justifies it. However, that will change when Zoe’s scary side comes out! He will be frozen with fear over Zoe’s sudden personality change.

The Bold And The Beautiful Spoilers – Carter Walton’s Good News

B&B spoilers reveal that Carter is probably one of the nicest guys on the CBS soap. He is a genuinely good person, is extremely forgiving, inspires others to be their best and tries to help people. So, he’s excited to meet Zoe’s sister and get to know her. While talking, he realizes that Paris might be the perfect person for the Forrester Foundation job.

After Ridge Forrester (Thorsten Kaye) meets with Paris, it is agreed that she would be the perfect person for the job. So, they get ready to give the social worker an amazing opportunity. Carter can’t wait to tell Zoe the news, but she won’t be happy about it. Of course, he sees nothing wrong with helping Paris and thinks he’s doing a good thing.

There is a difference in how Zoe interacted with Paris when she first arrived and how she deals with her now. So, it’s clear there is some hidden resentments and jealousy between the sisters. Zoe was patient and kind the first few days that Paris was in town.

Now that she has been hanging around for too long, Zoe’s patience is running out. She talks to her sister in a condescending tone, almost like she’s discipling a toddler. It’s pretty disrespectful and just downright rude, especially to do it in front of others. Some viewers think that Zoe is a secret bully. Others think that Paris has tried taking things from Zoe before, which would explain the tension. Maybe Zoe has low self-esteem, which would explain why she berates and humiliates Paris in public.

The Bold And The Beautiful Spoilers – Screaming, Demanding And Threatening

The Bold and the Beautiful spoilers reveal that when Carter shares his news with Zoe, she will completely lose control. She screams, throws a massive hissy fit and demands that Paris’ job offer be revoked. Kiara Barnes told Soap Opera Digest, “This is the first time she’s raised her voice. It’s the first time Carter has seen Zoe speak to him in a negative light, or in a disapproving or disappointed tone. His reaction is sheer confusion. He’s thrown off because Carter is such a sweetheart and he thinks he’s doing a good thing — for Paris and Zoe. There’s a lot riding on what will happen next, and how Carter responds to this ultimatum.”

B&B Spoilers – What Happens Next?

Carter isn’t going to know what to do when his sweet, soft-spoken fiancee suddenly turns into a terrifying monster. Carter is a man who always wants to know “why”, so he will be asking Zoe questions. If she feels that strongly about the job offer, then Carter needs to know the details so a decision can be made. However, we have a feeling that Zoe has no “proof” that Paris would destroy the foundation. Most likely, it’s just sibling rivalry and jealousy. It’s annoying, but it’s not a crime. As for Paris, we have only really seen the good side of her. We expect to see some of Paris’ claws come out soon.

The Bold And The Beautiful Comings And Goings: A Big Brother Fan Fave Arrives At Forrestershttps://t.co/Tj67NQyMIo

Regarding Carter and Zoe’s relationship, the COO really should find out what kind of woman he’s marrying. The romance is so new that the couple has never got into a fight before. When Zoe’s nasty side comes out, it could make Carter second-guess his proposal.