The Bold and the Beautiful Spoilers: Eric Disgusted With Quinn’s Vicious Behavior Over Video Leak

The Bold and the Beautiful spoilers reveal that at this point in time the future of at least two couples hinges on the contents of a digital photo frame. What was meant to be a nice gesture has now become the center of intrigue as one wily woman has uploaded a video that could blow Bridge sky high.

Why the big deal about a digital photo frame? Ridge Forrester (Thorsten Kaye) thought it would be a nice gift for estranged wife Brooke Logan (Katherine Kelly Lang) after the thaw ended between them. 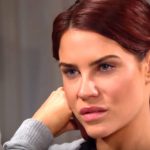 While it is a sweet gift, in all likelihood it could end up telling a tale that blows his relationship sky high once again, as well as his father’s relationship.

Everybody now knows about this, and seemingly it’s water under the bridge.

But not everybody yet knows about Brooke kissing Bill Spencer (Don Diamont). That’s all about to change!

Quinn Forrester (Rena Sofa) has a dog in the fight between Brooke and Shauna and she intends to place a huge bet on her homegirl from the desert. When the bruhaha erupted over Shauna and Ridge, Quinn and Brooke had a physical altercation, leaving Quinn ready to rumble and get revenge.

Explosive show spoilers reveal that after uploading Shauna’s video of the Brill kiss to Bridge’s digital photo frame, more than one person sees the scandalous vid.

The news will get out and answers will be demanded.

The Bold and The Beautiful Spoilers: Sally Really Dying Or A Ploy To Get Wyatt Back? https://t.co/M5VHz3oM3d pic.twitter.com/aWiD7urA77

The Bold and the Beautiful Spoilers – What will Eric Forrester do when he finds out what Quinn Forrester did?

Eric (John McCook) is a savvy guy, and he will put two and two together and figure out that his wife did the dirty deed. Eric loves his son and is thrilled to have him back with Brooke. He most definitely will not be thrilled that Quinn put a wrench in the works!

What do you think Eric will do once he finds out that Quinn has acted deviously and in a way that endangers his son’s happiness?

He will be angry, but angry enough to kick her out, and possibly end their marriage?

General Hospital Spoilers: Jordan Has Another Surprise Coming Her Way – Cat And Mouse Game With Cyrus