The Bold and the Beautiful spoilers expose the fact that a huge con is being played by several characters who are in on a conspiracy. But as the days go by, fans are suspicious that the real con is a red-headed wolf in sheep’s clothing!

Sally Spectra (Courtney Hope) is supposedly, maybe, presumably dying from a catastrophic illness. But in true soap fashion, her story is shrouded in mystery and tons of unspoken innuendo. 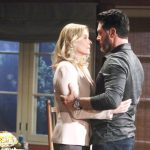 In the past, we have speculated that she could be suffering from Munchausen Syndrome, which occurs when a person deliberately acts as if they are ill when in reality they are not sick.

The Bold and the Beautiful Spoilers – Could Sally Spectra be pulling a major con on Wyatt Spencer (Darin Brooks)?

That is pure speculation, but in the face of no concrete evidence of what her actual condition is, it makes as much sense as anything!

In the meantime, her loved ones have gone out of their way to make Sally content and happy. This extends to Wyatt who has agreed to drop his relationship with Flo Fulton (Katrina Bowden) in order to move in with Sally.

These two are skirting around the issues because Sally has yet to reveal her condition to Wyatt, who has tried his darndest to trip her up and have her confess.

B&B Spoilers – What is Dr. Penny Escobar going to reveal?

Meanwhile, Sally has been avoiding her doctor, whose diagnosis we saw given to Sally, but we did not hear it.

Why is Sally’s avoiding her doctor’s desperate pleas to see her? It could be because she has something to hide and does not want to be confronted with it. But it is just as likely that she is really dying and doesn’t want to confront the ugly reality of her death.

Nonetheless, Dr. Escobar (Monica Ruiz) has had enough of Sally’s stalling and actually makes a house call to the beach house.

Sally is surprised of course to see her doctor, but she can’t very well run and hide. The time to talk is now, and the doctor is determined to have her say.

Just at the right moment, Wyatt returns home and catches the tension between the two women. What happens next? Will the words that follow mean the beginning of the end for Wyatt and Sally? Or will Sally’s true condition be revealed, making Wyatt’s commitment to her even more amazing and steadfast? Be sure to tune in and find out!

Emmerdale Spoilers: Jamie Plays With Hearts – Will Jamie Juggle Between Andrea and Belle?