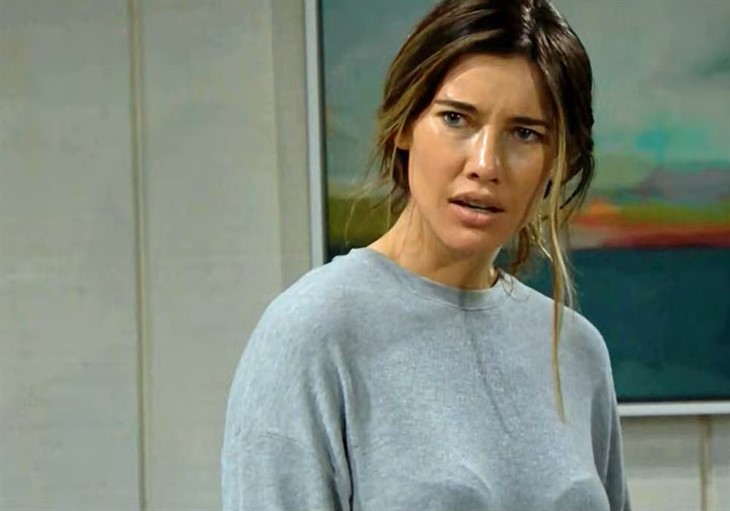 The Bold and the Beautiful spoilers document that Steffy Forrester (Jacqueline MacInnes Wood) appears to have already hit rock bottom. She also may be on her way back up. That cautious optimism will need to be confirmed through treatment and steady progress in the days and weeks ahead.

Rather than pushing an extended descent, B&B appears to be presenting a mini blip in Steffy’s life. The late summer and early fall of 2020 could be remembered as the period where Wood’s character started to become dependent on pain-killers but wasn’t sucked into a full-blown addiction.

The Bold and the Beautiful Spoilers: Penny Panics As Flo Interrogates And Investigates – Dr. Escobar Blows Up Sally’s Plan?

The Bold And The Beautiful Spoilers – Tremendous Lead-In To Drama

Steffy flamed out in front of Liam Spencer (Scott Clifton) at the cliff house. Soon thereafter she lashed out at him, Hope Spencer (Annika Noelle), and Brooke Logan (Katherine Kelly Lang). Then, Ridge Forrester (Thorsten Kaye) arrived at the Logan estate, learned what was happening, and was as shocked as everyone else, including those in the audience, to see Steffy pull a knife.

The next day Ridge was with Steffy back the cliff house, where he’d stayed the night. She slept and was cogent, but still in denial.

The arrival of Liam and Doctor John Finnegan (Tanner Novlan) changed the dynamic, with Steffy’s tone beginning to shift.

Steffy may have fallen as far as she will. If that’s the choice TBTP at B&B has made, then it’s fair to ask if it’s best?

Wood’s electric performances underscore the depth of her talent. Hardcore fans, who have seen the bulk, or every one of her episodes since she joined the cast, could offer educated opinions about how today’s efforts compare to past standouts.

Executive producer Bradley Bell recently said that he trusted Wood with any storyline. Confidence projected from the top boss affirms that the actor could clearly carry this particular arc much further if that’s desired.

The Bold And The Beautiful Spoilers – Positive Developments And Relapse

Steffy’s developing relationship with Finn is a positive aspect of this tale. He projects as her next love interest, with many possibilities resulting.

Along with the above, it’s become possible that Steffy, Hope, and Brooke will get along better. However, based on believability and the need for some conflict to persist that might not happen.

The Bold And The Beautiful Spoilers: Steffy’s Spiral Intensifies, Even Finn’s Not Enough https://t.co/2li15QbJvt pic.twitter.com/aNqRQWIix6

Soap fans know that character’s vulnerabilities can be revisited. So, Steffy could suffer a relapse at any future point.