The Bold And The Beautiful Spoilers: Sally’s Lies Blow Up – Can Steffy Forgive Sally’s Sick Trick? 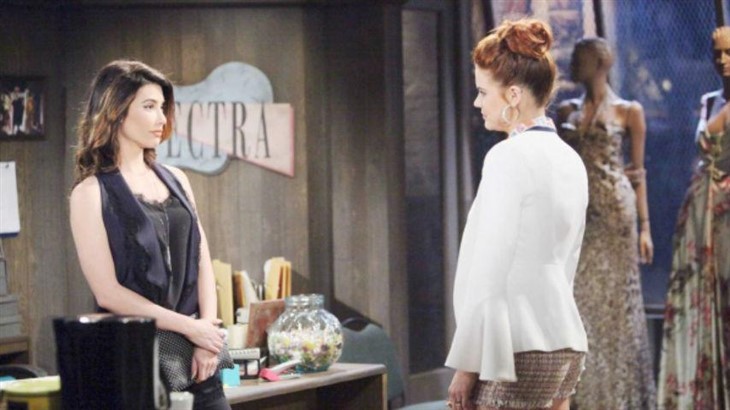 CBS The Bold and the Beautiful spoilers and updates tease that Sally Spectra’s (Courtney Hope) exposure could cost her a great deal. For starters, Sally’s been counting on her fake terminal illness to win Wyatt Spencer (Darin Brooks) back. This plan is going to backfire spectacularly after Sally’s lies blow up.

The Bold And The Beautiful Updates – Sally Spectra Looses

However, there’ll be consequences beyond just losing her last shot with Wyatt. Sally may be able to wiggle out of legal ramifications, but Steffy Forrester (Jacqueline MacInnes Wood) and Ridge Forrester (Thorsten Kaye) are bound to be furious.

Ridge adjusted some of Sally’s designs for his couture line just because he felt sorry for her. Steffy certainly took pity on Sally as well, but there’ll be no more of that soon! It’s safe to say Steffy will blast Sally in a big way, especially considering Sally’s history. B&B fans know Sally once stole designs from Forrester Creations, so Steffy may feel like Sally’s done nothing to show she’s changed.

Nevertheless, The Bold and the Beautiful has never really shown Sally as a bad person. Even now, Sally’s a desperate woman who’s been pushed to her limit. Sally’s just sick and tired of losing! It’s tough to blame Sally when she’s had her heart trampled on so many times and has faced so many unfair business hurdles. Sally’s just trying to fight for some happiness since no one else is fighting for her.

Steffy and Sally have established a nice bond at FC, so it’s a shame B&B will inevitably destroy their growing friendship. Is there a chance that it’ll be restored someday? Can Steffy ever forgive Sally for her sick trick? It’d be nice to see Sally salvage this friendship somehow down the road.

‘The Bold And The Beautiful’ Spoilers: Flo Escapes While Wyatt Is Held Captive? https://t.co/dPCKMggTaU pic.twitter.com/5SMuvFxxfB

Sally may not be able to score a spot on the Forrester team again, but Steffy might find compassion eventually. Since Steffy’s made mistakes of her own, she might come to forgive Sally in time. The Bold and the Beautiful could really use more friendships – especially now that Steffy’s getting a new man.

Steffy needs a gal pal to gab with so she can properly gush over this handsome fella. Sally probably won’t be serving as Steffy’s confidant anytime soon, but maybe she can redeem herself and make amends at some point.