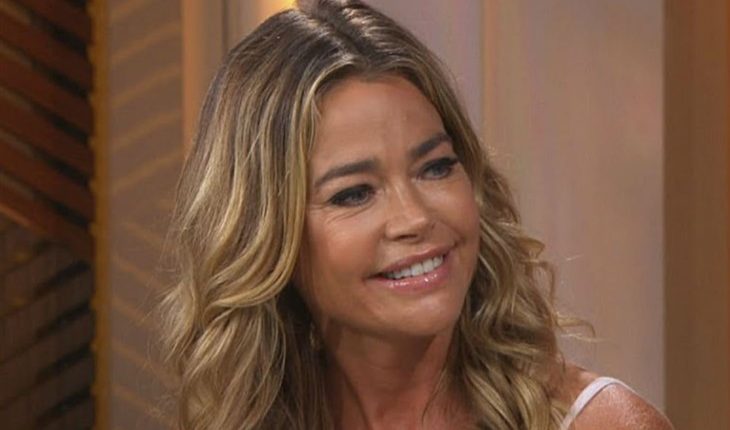 CBS The Bold and the Beautiful actress Denise Richards (Shauna Fulton) is back to work on the CBS soap. She recently discussed the strict safety measures that are being taken, including multiple temperature checks, literally measuring the distance between actors, and her own makeup brushes. Plus, she joked about naming the mannequins that are being used.

The B&B star explained to the Associated Press via ABC News that they have a choice in intimate scenes. They can either use a blow-up doll or have their partner as a stand-in if they are available. Richards explained,

“We were asked if our significant others would step in. [Richards told her husband] ‘They said I could also have my love scenes with a mannequin — which is fine — but I’d much rather be with my husband.'”

During the interview, Richards also joked about naming mannequins. It came as she was talking about how she would sometimes have to recite her lines to one. It all has to do with social distancing. They are required to stand eight feet apart and they actually have a person on set that carefully observes to make sure the rules are being followed. Richards said that this person will literally measure to make sure they are eight feet apart.

“It was challenging because the times our characters would get a little closer with each other, a mannequin would be there and I, the actor, stepped off to read the lines for the other actor talking to the mannequin.”

The Bold and the Beautiful has strict safety regulations. There are multiple temperature checks, including one when she arrives at the set and another before she gets in front of the camera. Each week, she must take a COVID-19 test and it must come back negative. They always ask her health questions to make sure nothing sticks out as a red flag.

Everyone must be eight feet apart and wear a mask at all times (both cast and crew) except when she is getting ready to say her lines in front of the camera. There is a separate entrance and exit so people aren’t passing each other going in and out.

Anything people bring to the set with them: scripts, cell phones, water bottles, etc. must go in a plastic bin. This bin pretty much goes where the actor goes.

The Bold and the Beautiful Spoilers: Bridget Hears Her Husband Declare His Love For Brooke – Deacon & Whip Square Offhttps://t.co/75NpQZVVcQ

Richards even explained that masks are required as much as possible during hair and make-up. Each cast member has their own make-up brushes and hairbrushes. Then, there are the touch-up applicators, which are kept in a separate bag. Richards noted that the masks kind of mess up the make-up a bit so touch-ups are needed more often. However, despite all of these safety measures, Richards is excited to be back at work!