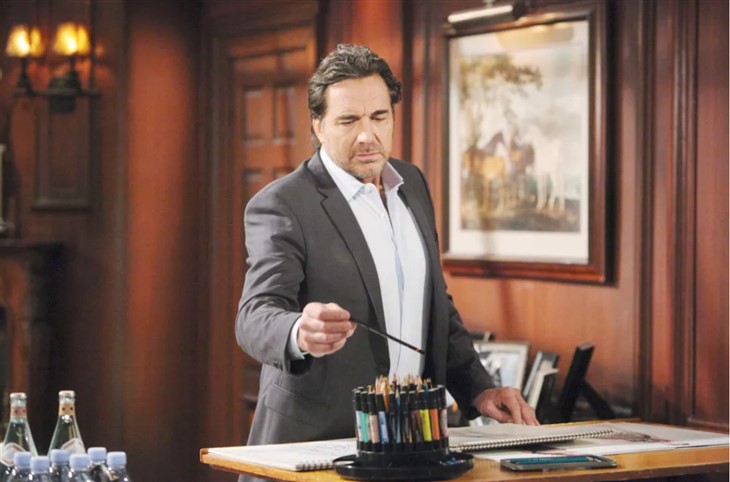 CBS The Bold and the Beautiful spoilers document that Ridge Forrester (Thorsten Kaye) didn’t anticipate, or need, another family crisis happening. Now, instead of simply having to balance the end of Bridge’s latest edition and the start of his new marriage to Shauna Forrester (Denise Richards), Ridge must also focus on his daughter’s endangered recovery.

Steffy Forrester’s (Jacqueline MacInnes Wood) pain issues are so intense that she’s made a reckless choice. Accepting and then taking the underground pills Vincent Walker (Joe Lo Cicero) sent to her caused an immediate problem. And, it’s one that Ridge must become involved with.

The Bold And The Beautiful Spoilers: Ridge Moves Away From Brooke – Bond With Shauna Deepens

The Bold And The Beautiful Spoilers – Knowledge Is Powerful

Liam Spencer’s (Scott Clifton) find of Steffy at the cliff house was chilling. Thankfully, he was able to help her and also confirm that something was off, as he suspected.

This discovery will allow Ridge to learn what’s happened. He had recently believed that Steffy was improving and that Liam’s misgivings about Dr. John Finnegan (Tanner Novlan) were more about Steam related jealously than serious concerns.

While Liam’s suspicions about the doctor were off-base, his instinct about Steffy’s well-being was well placed.

Anyone who’d been unknowingly wronged out of genuine reconciliation and then manipulated into marriage would be doubly distracted. Ridge has no idea that Shauna was involved in authorizing the filing of the Bridge divorce papers and the sham wedding chapel ceremony on the strip in Las Vegas, Nevada.

The end of what was a Bridge reunion and the start of what can be tagged as a Shidge union caused Ridge to not be as aware, or involved with Steffy during the past month. He will blame himself in that regard, but shouldn’t.

Ridge’s attention was forcibly shifted from Brooke Logan (Katherine Kelly Lang) and then Steffy. But now, in knowing about his daughter’s growing problem, he will become involved in trying to help pull her out of a growing dependence on substances that temporarily mask pain.

The Bold and The Beautiful Spoilers: Thomas And Hope Co-Parent Squeezing Out Liam #bb #boldandbeautiful https://t.co/6PONB9CloR

This new issue will serve as a similar parallel to what Ridge just experienced. In contrast to the Shidge situation, Steffy’s issue is legitimate. It’s consuming nature will cause Ridge’s focus to shift from Shauna and Quinn Fuller Forrester’s (Rena Sofer) unfolding plans. So, that part of his personal life will remain out of order.