The Bold and the Beautiful spoilers for Monday, March 2, tease that Sally Spectra (Courtney Hope) will have a big decision on her hands. As B&B viewers know, she has just been asked by Wyatt Spencer (Darin Brooks) to move back in with him at the beach house so they can spend the rest of their lives together. It’s an amazing proposal, and it’s what Sally has been wanting to hear for ages now. 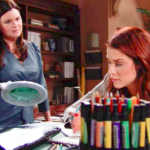 However, Sally thinks that the timing of Wyatt’s proposal is a bit suspect. After all, it wasn’t that long ago that Wyatt came to her and told her that he wanted to end their engagement in order to rekindle his relationship with Flo Fulton (Katrina Bowden). It’s only natural that Sally would be skeptical under the best of circumstances, but there are other factors to consider here as well.

As B&B viewers know, Sally specifically asked Katie Logan (Heather Tom) not to tell Wyatt about her terminal condition. But now that Wyatt has made this grand gesture to her and has asked her to move back in, Sally has grown a bit suspicious as to whether or not Katie kept her confidence. Sally is adamant that she doesn’t want Wyatt to know about her condition because she doesn’t want to be pitied or be a “charity case.”

Of course, B&B viewers know that Wyatt doesn’t feel that way about Sally at all. In fact, he truly cares about her, and he does indeed know about her terminal condition. But he doesn’t want Sally to know that he knows about her condition. He just wants to give Sally the support and love that she needs during this final phase of her life, and he doesn’t want her to think that it’s about pity or charity.

Well, on Monday’s episode of the Bold and the Beautiful, Katie and Sally will continue their talk at Forrester Creations, and Katie will try to persuade Sally to take Wyatt upon his proposal to move in with him. But as they are talking, it appears that Katie will say something that makes Sally think that she may have divulged her secret to Wyatt.

That will lead to some tense moments, and Katie will have to be careful to cover her tracks. However, it appears that she’ll manage to convince Sally that she didn’t betray her confidence, as B&B spoilers say that Sally will ultimately agree to move back in with Wyatt. It looks like she’ll realize that she wants to be with Wyatt again, despite any skepticism she has about whether Katie spilled the beans.

The good news here is that Sally will be moving back into the beach house. But the strange thing is that she’ll apparently want to keep her illness from Wyatt, rather than letting him in and accepting his help and support. We’ll see how long she’s able to keep her secret, though. After all, she does experience physical symptoms pretty regularly, and those symptoms seem to be impossible for her to hide.

And while Sally’s keeping that secret from Wyatt, Wyatt will be keeping his knowledge about her illness a secret from Sally. Of course, what he really wants is for Sally to eventually feel comfortable enough to tell him the truth so that he can support her and help her through her final days. We’ll see if Sally will ever tell him the truth, although it seems that at some point her symptoms should become pretty apparent to everyone, and especially to Wyatt.