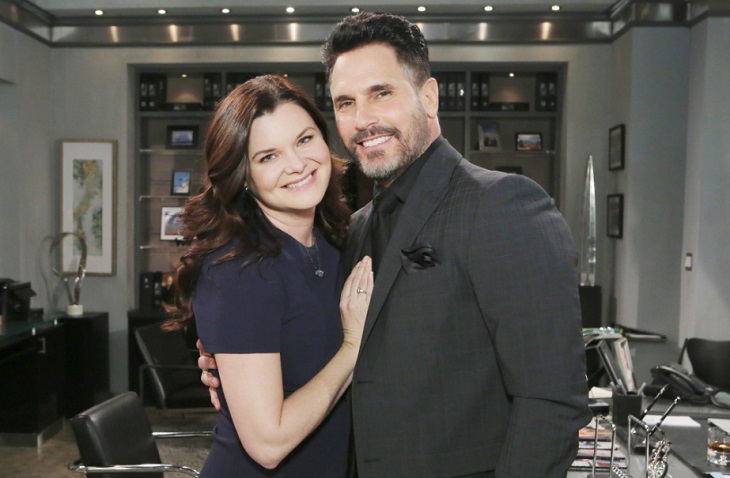 The Bold and the Beautiful spoilers reveal that Katie Logan (Heather Tom) is furious with Bill Spencer (Don Diamont). However, fans are convinced that “Batie” will eventually reconcile. As for what Katie sees in Bill through all his deception and betrayals, the actress gave an interesting answer. It seems Katie realizes Bill’s moral potential whereas nobody else does.

Bill Spencer’s Moral Compass On The Bold and Beautiful

B&B spoilers reveal that Bill keeps making these terrible mistakes in his relationship with Katie. Despite her being the only woman he has ever truly loved, he keeps betraying her. What makes it even worse is that it’s not a random chick, acquaintance, or employee. Bill has repeatedly hurt Katie with her big sister, Brooke Logan Forrester (Katherine Kelly Lang).

Speaking to TV Insider, the actress explained that “Batie” brings out the best in one another. For Bill, that means Katie is his moral compass.

Part of being of moral character is realizing that sometimes people fail. That is when they need to admit to their mistakes, take responsibility, and face the consequences. Tom said that Katie doesn’t allow Bill to get away with very much. She wouldn’t be doing him any favors if she did.

Katie Logan Not Trying To Change Him – CBS Soap Spoilers

The Bold and the Beautiful spoilers reveal that some viewers think that Katie is trying to change Bill. Tom disagrees with this and explained there is a difference between changing a man and having high expectations of him.

Katie fell in love with Bill the way he is… she doesn’t want him to be any different. She just wants to make Bill be a better and improved version of himself.

The Bold and the Beautiful Spoilers: Moral Potential and Great Expectations

It is teased that this is why Katie is so understanding and forgiving with Bill. The actress also explained that Katie is positive that Bill can do the right thing and that capability is inside of him.

“I see it more as she has high expectations for him. I understand being that way. She knows it’s in him to do the right thing and to be the bigger person. She also recognizes that she didn’t fall in love with a boy scout — she doesn’t want a boy scout. I don’t think she has a problem with him being a certain way in business — strong, decisive, even ruthless — she has a problem when he lies to her!”