The Bold and the Beautiful Spoilers: How Does Denise Richards’ Plot Reveal Impact B&B – Now That She Is A Forrester? 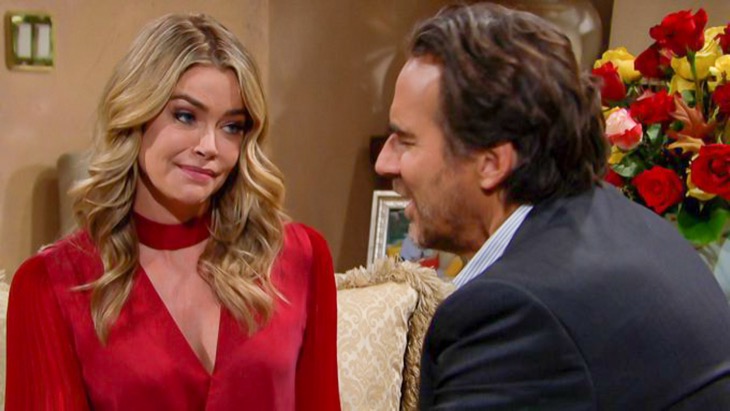 CBS The Bold and the Beautiful spoilers and updates tease that Denise Richards’ (Shauna Fulton) reveal may have been inadvertent, or purposeful. With whatever was the case, the actor’s appearance on People TV’s Couch Surfing seems to confirm that Shauna and Ridge Forrester (Thorsten Kaye) were married in Las Vegas, Nevada.

B&B fans have been awaiting the next new episode of the show since late April, when production shut down. So the possible slip of the tongue is big news while classic episodes continue playing.

Bold And The Beautiful Updates – Her Name Is Shauna Forrester?

When last she was seen, Shauna was showing Ridge the town. He went with her to Vegas in order to learn more about her life.

A green-screen effect made it appear as though both characters were partying on the strip. No wedding scene was shown, but a time gap and a subsequent episode in which Ridge was back home with Brooke Logan (Katherine Kelly Lang) implied that something dramatic may have happened.

Ridge jetted with Shauna from Los Angeles, California, as an unhappily married man. He’ll have created a major mess if Shauna became a Forrester during that trip.

It wouldn’t have been legal for Ridge to marry Shauna in Vegas when he was already married to Brooke, with Bridge’s most recent wedding holding sway in California. Although the inebriation effect will surely come into play regarding Ridge’s lack of intent to have purposefully done wrong.

The major issue would be the trio’s reaction and response to what happened. The three people being Ridge, Shauna, and Brooke.

Ridge was hungover, while Brooke stood by him, believing that she’d rescued her husband from Shauna’s clutches. Whether Ridge knew what he’d done in Vegas wasn’t clear and Richards’ character wasn’t shown.

Bold And The Beautiful Spoilers – Marriage Validity Might Not Matter

It would see likely that, based on circumstances, that any ceremony that took place in Nevada would be later ruled invalid. However, Brooke’s total devastation, when learning of the completion of that event, valid, or not, would be the issue.

Ridge was torn between his developing feelings for Shauna and his history with Brooke. Whether Shidge now exists, or Bridge survives is a great tease for the fans as they anxiously await fresh shows.

B&B returned to work last week and anticipates starting a regular four-day studio shooting schedule (Tuesday through Friday) this week. Viewers could see the next new episode as early as July, if all goes well.

The Young and the Restless Spoilers: Adam Fights For His Freedom Or Leaves GC When New ‘Y&R’ Episodes Air?