The Bold and The Beautiful Spoilers: Flo Confronts Sally About Her Fake Sickness, Sally Twists Everything and Blames Wyatt 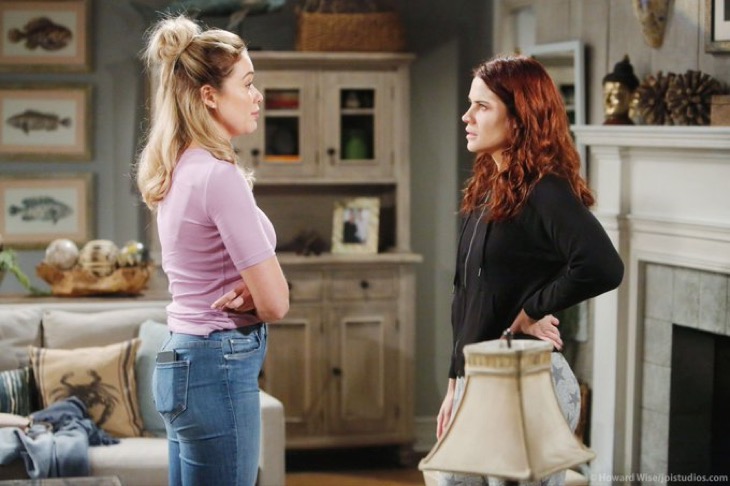 The Bold and the Beautiful spoilers suggest that Sally Spectra (Courtney Hope) could react at first with total denial and an attempt to keep her deception going when Flo Fulton (Katrina Bowden) confronts her with the truth. However, once evidence is presented and there’s no weaseling out of it, Sally could become despondent or even suicidal!

B&B Spoilers – But Wyatt Said She Could Stay!

B&B fans know that recently, Sally and Wyatt had an emotionally agonizing conversation at Wyatt’s house. While Wyatt tried over and again to comfort Sally and reassure her that he and Flo still cared about her, Sally rebuffed his efforts. Rather, Sally threw Wyatt’s words back in his face. Every word, Sally subtly twisted to remind Wyatt of their shared past or to throw blame back at him or at Flo. It was an awesomely manipulative attempt on Sally’s part guilt Wyatt into changing his mind concerning his mutual decision with Flo to ask Sally to leave.

The outcome was almost a foregone conclusion, however, when B&B viewers watched the pained expressions on Wyatt’s face. In fact, some would argue that Wyatt was a pushover since instead of sticking to his guns; he rolled over and cried uncle under the constant barrage of Sally’s stinging (yet subtle) accusations. The bottom line is that Wyatt in the end, Wyatt did a complete 180.

Most B&B viewers might agree that it was only a matter of time before Flo (or someone else) discovered Sally’s deception. Sally didn’t take the time to truly plan out her course of action. All Sally’s lies seem like a spur of the moment group of ideas hastily thrown into action. It’s obvious at this point that Sally thought her ruse would work on Wyatt in relatively short order. Otherwise, she would have committed to more drastic, long-term efforts to make herself appear to be slowly succumbing to whatever terminal illness she’s told the world she has.

Flo was right to begin thinking there was something wrong when Sally passed the first deadline for her death and just continued living without any further decline in her health. As Flo noted in a conversation with the duplicitous Dr. Penny Escobar (Monica Ruiz), Sally just looked like maybe she’d gotten a bit paler and she started walking limping awkwardly with the help of a walker.

B&B viewers know that Flo’s suspicions have now paid off and she is now sure to fly into a rage Sally might do well to fear.

The Bold and The Beautiful Ladies Take On TikTok With Glamorous Results https://t.co/XfrcNCXJ8k pic.twitter.com/SCuafoVR9m

If at first B&B viewers don’t see Sally denying that she lied in an effort to briefly continue her doomed masquerade, they will see her try to twist the whole situation into her favor. In a sick effort to maintain whatever image Sally believes she has, she might try to throw the blame for her deceit back on Wyatt. Wyatt made her behave the way she had. Wyatt drove her to emotional extremes. Wyatt loved her and left her. Wyatt dumped her like a wet rag doll he no longer wished to play with. Flo was his shiny new toy!

If only Wyatt had been a good boy and had loved her the way she wanted … no, needed … to be loved, Sally would never have gone as far as she had to get him back.

But, it was all done out of love! Sally loves Wyatt and it’s just sick that he’s allowed Flo to blind him to the fact that he and Sally belong together!

It’s sad, but B&B viewers just might see Sally carry her antics farther than even she intended. Her efforts at deceiving others may move dangerously into the area of self-deception, and when Sally discovers she can’t fool anyone anymore, she may feel she truly has nothing more to live for.

General Hospital Spoilers: Lulu Continues To Interfere In Maxie’s Life, Desperate To Save Friend From Valentin