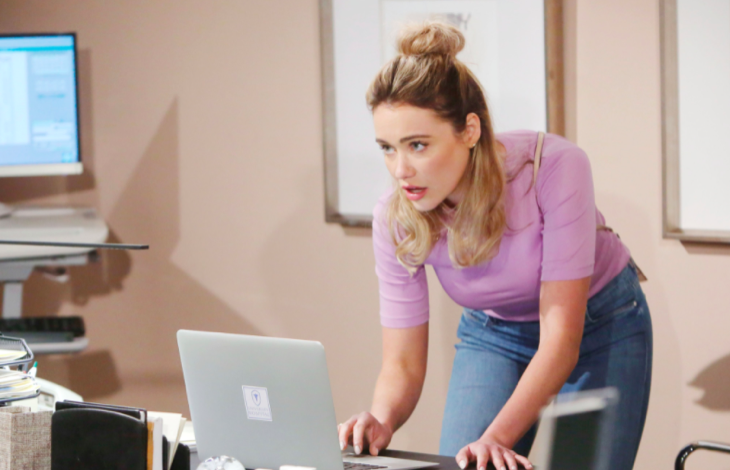 The Bold and The Beautiful Spoilers: Ridge and Brooke Soulmates – But She Has a History Of Too Much Touchy Feely With Others

Viewers expect mega drama now that Sally’s lie is known. Flo’s instinct informed her that something was off. Persistence leads to the acquisition of dangerous information.

Meanwhile, Wyatt Spencer (Darin Brooks) remains conflicted. He felt terrible after learning that Sally was expected to die. How soon he’ll come to know that she’s not terminal is the next tug in this storyline.

The Bold And The Beautiful Spoilers – Sally Spectra Desperate For Love

Sally is playing against herself. She’s long been known as a fighter, which was and remains an accurate assessment of her personality type.

However, after claiming to be dying, Sally then resisted everyone’s urging that she seek some form of treatment, or at least a second medical opinion. That didn’t match with who she presents herself to be and eventually began to raise questions.

Flo, along with Zoe Buckingham (Kiara Barnes) engaged in recent conversations with other characters that began to apply pressure to Sally’s quitter’s story.

Penny is riled by Flo’s questions because the good doctor is supporting a lie, which breaks any medical code of conduct. Ruiz’s character has bought a bill of goods that her supposed friend Sally sold her. Yes, Penny seems destined to lose her license to practice medicine and be denied an opportunity to work in the fashion industry.

Sally’s belief that she and Wyatt were a great couple falls flat on three major points. First, they’ve only been close for approximately a year. Second, they broke up twice in a matter of months, with Wyatt cutting ties both times. Third, each edition of Wally was short-lived, with the sequel being much shorter than the first version.

What’s been revealed about Sally’s desire to romanticize the past is that she seemingly hasn’t experienced a truly deep relationship with any man. As hardcore viewers recall, Sally and Thomas Forrester (as then played by Pierson Fode) were a couple. But they didn’t last all that long either and even Sally doesn’t consider that pairing to have represented anything overly meaningful.

The Bold And The Beautiful Spoilers – Okay, What Comes Next?

So, the climax to the Sally is dying storyline appears to have arrived. What follows will either result in her being shamed into leaving town, or surviving to seek eventual redemption.

It’s possible to assume that Sally really is dying but just doesn’t know it yet. If that’s the case, then Hope is sadly working through her final shows on B&B.