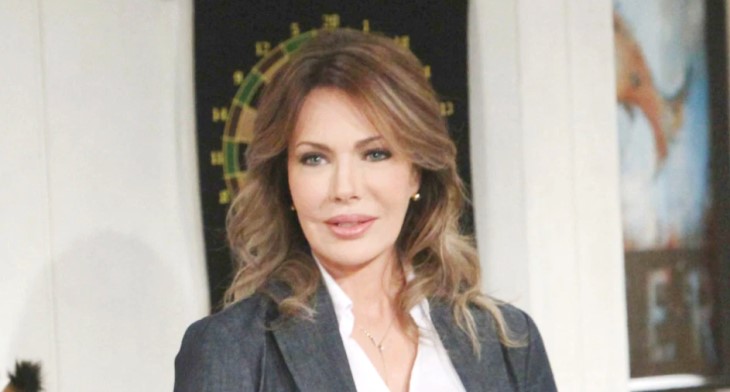 The Bold and the Beautiful Fashion: Get Brooke Logan’s Look For Less – Katherine Kelly Lang’s Style!

The Bold and the Beautiful Spoilers – Taylor Hayes And Ridge Forrester Have History – And Children Together!

Longtime viewers of The Bold and The Beautiful will recall the history of Taylor and Ridge, and that they were married twice; from 1992-1995 and then again from 1998-2006. They had three children; Thomas Forrester (Matthew Atkinson) and twin girls, Steffy Forrester (Jacqueline Macinnes Wood) and Phoebe Forrester (Mackenzie Maury). Phoebe unfortunately passed away at the age of 19 in a car accident.

Taylor has returned to LA since leaving town occasionally, but perhaps with the problems that their son Thomas has had he may have gone to visit with his mother and she, as a psychiatrist may have been trying to get him straightened out since he left like a dog with his tail tucked between his legs from the Forrester mansion after even Douglas Forrester (Henry Joseph Samiri) rejected him at the wedding to Zoe Buckingham (Kiara Barnes) where he tried to do a bride switch with Hope Logan (Annika Noelle) at the last minute! Something has definitely gone wrong with Thomas since the last time mother and son spent any meaningful time together!

And should Thomas want to return to LA, Taylor may feel his mental problems may be serious enough to follow him back to town and keep an eye on him! Besides, she has a granddaughter there, and her remaining daughter Steffy is there too. It wouldn’t be surprising if she wanted to keep an eye on Thomas and moved back; Taylor made an unexpected shocking return to Los Angeles in 2018 to confront Diamond Bill Spencer (Don Diamont) about his one-night affair with Steffy, blaming him for destroying her daughter’s marriage and for traumatizing his own son Liam Spencer (Scott Clifton).

Taylor continued to berate Bill for his actions and Bill wondered why she hadn’t been around lately. Taylor, however, told Bill she has actually been in town for a while and admits that she was the one who shot him – she is obviously a fierce mama bear!

Steffy soon discovers that it was Taylor that shot Bill and both women plead with Bill to not send Taylor to prison, which Bill reluctantly agrees to but only for Steffy’s sake. Taylor agrees to keep a low profile while in town only seeing Steffy at the cliff house and sought therapy nearby. Taylor could be lurking around town again, Thomas had to go somewhere!

The last time Taylor was in town, she had come for Liam and Hope Logan’s (Annika Noelle) last wedding, in 2018. At first she was very resistant to going to the wedding, however she decided to go in the end. As soon as Taylor arrived at the wedding she went over to talk to Liam with one last plea to make things right with Steffy, Brooke overheard Taylor talking to Liam and was furious.

The Young and The Restless’ cake fight between Katherine Chancellor (Jeanne Cooper) and Jill Abbott (Jess Walton), and Hope and Steffy walk in on them, both very angry at their mothers! As one can easily see, there is a lot of vitriol between Brooke and Taylor, and they have been romantic rivals over Ridge for many years! Brooke will definitely not be a happy camper if she has yet another competitor for her husband’s heart, having just thought she’s gotten rid of Shauna Fulton (Denise Richards)!