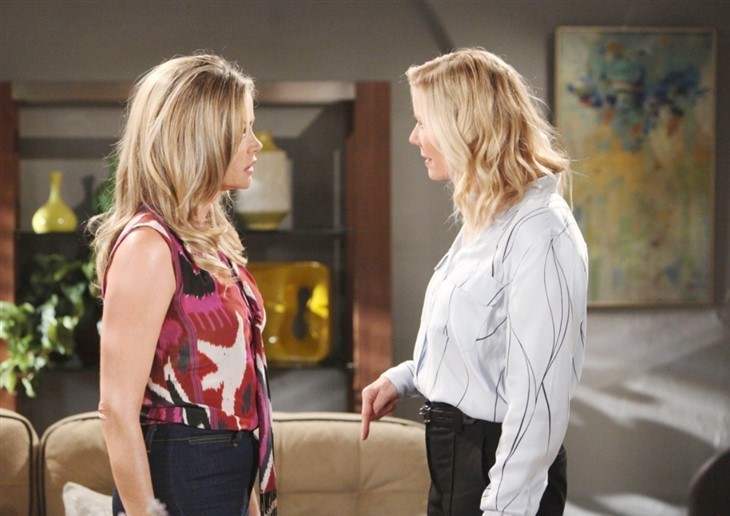 The Bold and the Beautiful spoilers document that in Los Angeles Brooke Logan (Katherine Kelly Lang) is not about to let Quinn Fuller Forrester (Rena Sofer) off the hook. Following her total vindication, Brooke is in a position to turn the soapy tables on Quinn.

Rather than Brooke being removed from the Forrester matriarch line, Quinn faces the very real prospect that she could be frozen out of the family. Eric Forrester (John McCook) has to make a decision about whether he wants to remain married to Quinn. And with that so will go her life.

Eric has remained fully fond of Brooke, years after their second marriage ended in the mid-2000s. The two children they had together is the enduring bond they share. But Quinn has always known that Eric continues to hold a place for Brooke in his heart that goes beyond parent status.

Brooke was the person that Quinn wanted to force out of the family. The ill-fated attempt to pair Shauna Fulton (Denise Richards) with Ridge Forrester (Thorsten Kaye) led to what could be total life decimation. And Brooke has reclaimed the ability to help shape that outcome.

Shauna was not in sync with Brooke during the time they were vying for Ridge’s attention. Love was never really the issue, as all involved know that Brooke has and remains Ridge’s one and only.

So, with the Shidge dream dashed it might be possible for Brooke and Shauna to have a transactional connection where Quinn is concerned. It’s not that the ladies will, or can ever become buddies. But Shauna can dig more deeply into Quinn having used her to achieve personal goals.

There are many ways that Shauna can help Brooke, with one of them is telling Eric the full truth. As B&B fans know, Shauna repeatedly said that Ridge should remain with Brooke, because he loved her. So, there is a logical basis for believing that Richards’ character won’t work against Brooke now, which would represent a form of help.

There is traction in thinking that Quinn and Shauna are also experiencing a connection that transforms from friendship to enemy status. Quinn is on the verge or already has lost everything.

Shauna’s daughter is a Logan, which gives her status that Quinn doesn’t own. On that point alone, Brooke can revisit the perception of Shauna and consider whether working with her against Quinn could be useful.

The Young And The Restless Spoilers: Summer Deserves True Love – Kyle Needs A Mommy Not A Wife