The Bold and The Beautiful Spoilers: Brooke Learns Ridge’s Location As Shauna & Ridge Head Out For A Wild Night – Ready To Drag Him Back 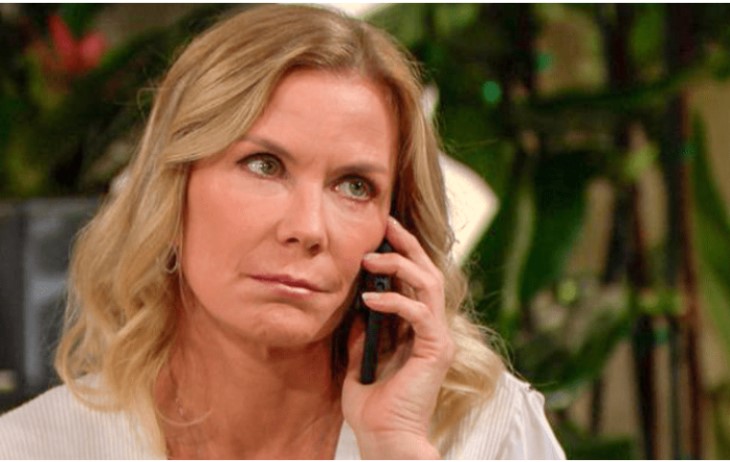 The Bold and the Beautiful Spoilers: Sally Struggles To Maintain Her Con – Flo Closing In On Truth

Unbeknownst to Ridge, Brooke has learned to use technology to her advantage since the terrible incident with Quinn Forrester (Rena Sofer) sending that heinous video of Brooke and Bill Spencer (Don Diamont) kissing in Hope Logan’s (Annika Noelle) cabin that night to her digital photo frame! She found that she had a way, using an app to track a child’s cell phone that she could track any phone number she had in her phone, and decided to track Ridge’s to see if it would work.

She knew he had followed Shauna and she lived in Las Vegas but she didn’t know the address and was unable to find her in any telephone listings since she doesn’t have a landline, as many people don’t in this day and age. Cell phones have made landline phones virtually unnecessary.

So Brooke heads out to Las Vegas and rents a car at the airport when she gets there, and starts using the app on her phone to track down Ridge! If she finds him in bed with Shauna, so be it – but she is going to track down her man and bring him back home where he belongs!

It is already evening when Brooke arrives in Las Vegas, but that is okay – that way it is dark and Ridge may not realize that it is her who is following him, once she tracks him down. Ridge and Shauna have decided to have a wild night on the town, and are at a casino with a bar, and Shauna had never had money to gamble with before so Ridge decides to be the big spender – and the big drinker!

He had no appetite after seeing that little bit of quasi-porn in the photo frame, and he and Shauna both have been knocking a few drinks back – it’s just that he are hitting an empty stomach, so he’s pretty close to a blackout drunk! It’s not the first time he’s had too much to drink with Shauna around, and things get pretty deep between the two of them.

Ridge just needs to blow off steam, which has built up to the point of his exploding because of Brooke’s betrayal with Bill, and, the night being young, they continue their wild night on the town!

The Bold and the Beautiful Spoilers – Ridge Forrester Wakes Up The Next Morning, But It’s Not In Las Vegas, And It’s Not With Shauna Fulton, And He Doesn’t Have A Clue!

Brooke was obviously successful in hunting Ridge down in Vegas and bringing him back home – he wakes up and he realizes he’s not in Las Vegas, and he’s not with Shauna, he’s at home in Los Angeles in his bed with Brooke beside him and he doesn’t have a clue how he got there, but more importantly, he doesn’t know why he’s there! He has no idea what happened, and he does call Shauna, but she doesn’t give him any clarity about what may or may not have happened between them; or how he got home!

The Bold and the Beautiful Spoilers: Sally Struggles To Maintain Her Con – Flo Closing In On Truth https://t.co/1aKHgl20Iw pic.twitter.com/x2gQ5Ezxss

He is just flat out confused! He is still upset about what happened with Brooke, and yet finds himself beside her in bed after having the amazing time with Shauna in Las Vegas, and doesn’t know why he isn’t there with her and she can’t tell him – or maybe won’t tell him – either! This confusing situation doesn’t help him at all, and he just plain doesn’t understand what has happened!

General Hospital Spoilers: Peter Continues To Manipulate Maxie, Ready to Do What It Takes To Keep Her In The Dark

The Young and The Restless Spoilers: Amanda Still Healing, Put Her Trust In Nate And They Share Their First Kiss