‘The Bold and the Beautiful’ POLL: Did Steffy Make The Best Choice By Revealing Thomas Truth? 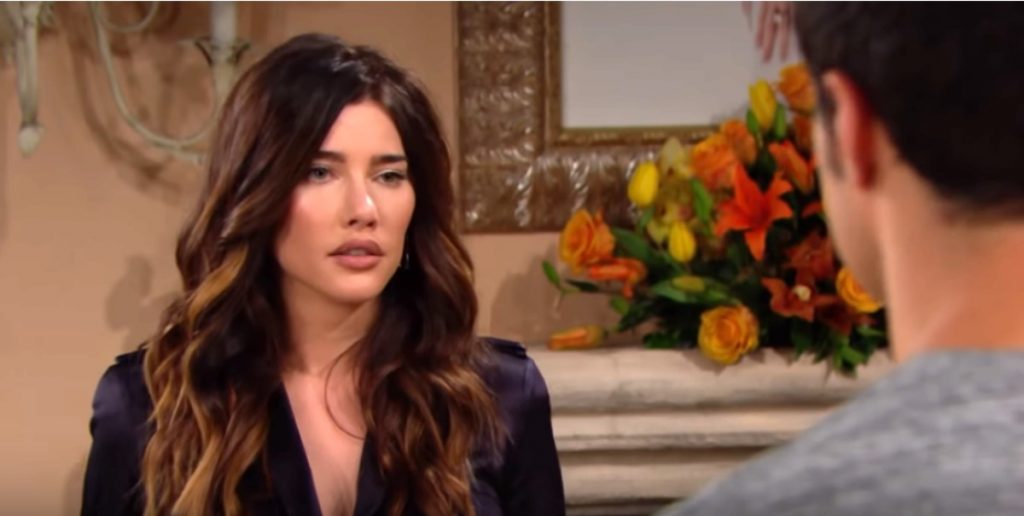 Steffy Forrester (Jacqueline MacInnes Wood) knew she had to tell the truth about her brother on ‘The Bold and the Beautiful’. Thomas Forrester’s (Matthew Atkinson) continued obsession with Hope Logan (Annika Noelle) was revealed when Steffy told Liam Spencer (Scott Clifton) and then, at this request, Hope, the truth about the backyard cliff house kiss.

There’s no question about whether Steffy should have informed Liam about the circumstances that led into the incident that caused Hope to believe she was betrayed. Wood’s character recently realized that Liam living with her and their daughter, Kelly Spencer (Avalon and Colette Gray), hadn’t revived his desire to resurrect ‘Steam’.

That hard truth and Steffy’s guilt forced her to tell Liam what happened. She knew that doing so would create immediate consequences that couldn’t be managed.

The Bold and the Beautiful Spoilers Tuesday, March 10: Bill & Brooke Agree To Keep Their Kiss A Secret – Liam, Hope, & Steffy Plot To Bring Thomas Down

The Bold And The Beautiful Spoilers – Context Of Situation Worth Review

Slack can be given to Steffy for being caught up in the moment at the time her brother alerted her to Hope’s pending arrival. Thomas’ cell phone call enabled his sister to orchestrate a scenario where it looked as though Liam was expressing his feelings for Hope’s rival the day after he’d proposed ‘Lope’s’ remarriage. That served to further Steffy’s goal of reuniting her own family.

Thomas had followed Hope without her knowledge, which viewers likely felt was a bit soapy. But that part of the plot was followed by an effective sequence that had Atkinson’s character hiding in the bushes at an angle where he wasn’t visible to Hope, Steffy, or Liam.

The kiss happened and Liam returned it, while Hope stood with tears running down her forlorn face. Clifton’s conflicted character couldn’t believe what happened and has blamed himself ever since.

In effect, Steffy recognized in the late winter of 2020 what she previously realized in the summer of 2018. Liam loves Hope more than her and they have a child, Beth Spencer (Madeline Valdez and River Davidson) as well.

Knowing that she and Liam weren’t going to rekindle the feeling that exists within the photo that hangs on her living room wall, Steffy made what is a selfless decision. Yes, she was complicit in Thomas’ scheme for her own selfish reasons.

But Steffy’s love for Liam is real, which is what was driving her in both furthering the ruse and then exposing it. Contrast her actions to those of Thomas, whose love mostly centers on himself with a smidgen of genuine emotion reserved for Douglas Forrester (Henry Joseph Samiri) during brief moments of clarity.

The Bold And The Beautiful Spoilers – Where To From Here?

The question in this section header offers another check-in Steffy’s favor. She’s relinquishing the chance to believe that Liam could re-explore his feelings for her over time, assuming that Hope would have remained out of his life.

Steffy also knows that Thomas’s response, along with whatever her father, Ridge Forrester (Thorsten Kaye) might do, is unknown. Maybe everything will work out for the Forrester’s and maybe it won’t.

There may be a contingent who feel that Steffy should have kept quiet, due to a belief that ‘Lope’s’ history is hardly a predictor of a certain future. That viewpoint is debatable, but can also be considered.

Fans of ‘The Bold and the Beautiful’ rightfully express their opinions on a regular basis. So, did Steffy make the best choice by revealing Thomas? Please vote in our poll!

Days of Our Lives Spoilers: Xander Takes Sarah For Night Of Romance, But ‘Xarah’ Doomed